5 Here’s Why Toyota's Highlander Is One of the Safest Vehicles You Can Buy in 2021
Car video reviews:
Up Next

Founded in 1959 with a clear purpose, the Insurance Institute for Highway Safety isn’t as lax as the National Highway Traffic Safety Administration. From crashworthiness tests to autonomous braking and the performance of the headlights, the IIHS takes safety more seriously than the federal agency that enforces U.S. vehicle safety standards.
12 photos

According to the Insurance Institute for Highway Safety, the 2021 Ford Mustang Mach-E isn’t worthy of the Top Safety Pick+ award over a single deficiency. As you already know from the headline, the LED reflectors of the Select and California Route 1 leave much to be desired. Only the LED projectors of the Premium, GT, and First Edition trim levels were rated good, which confirms that cost-cutting doesn’t go unnoticed at the IIHS.

Another shortcoming, which isn’t as bad as the standard headlights, would be the anchors for the child seat. The IIHS couldn’t award them a better rating than acceptable, which is often the case with modern vehicles.

In all six crashworthiness trials, the all-electric crossover was deemed good by the Virginia-based nonprofit organization. Maximum points were also awarded for crash avoidance, validating the Ford Motor Company’s efforts to create a head-turning utility vehicle that prioritizes safety performance.

Priced from $42,895 in the U.S., the Mustang Mach-E Select can be had from $35,395 after the federal tax credit. State and local tax incentives may bring the starting price lower still, making the five-seat crossover a tempting choice for many people in the market for an electric vehicle.

The entry-level trim isn’t exactly deprived of creature comforts either because the Dearborn-based automaker offers many standard features. The Select definitely ticks all the right boxes, from 18-inch aluminum wheels to the SYNC 4A infotainment system, a 10.2-inch digital instrument cluster, and a 15.5-inch touchscreen display. Customers can expect an EPA-rated 230 miles (370 kilometers) of driving range from the 68-kWh standard battery and rear-wheel drive, while AWD is available for an extra $2,700. 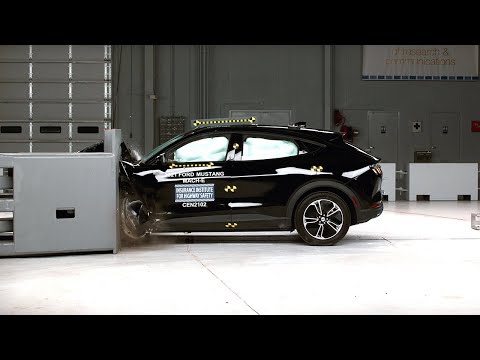