The Camry is dominating the mid-size sedan market. That's partly because Toyota never stopped making it bolder and angrier looking with each generation and model year. It culminates with the sporty Camry TRD, a car that doesn't seem to have a direct rival outside of maybe Acura.
3 photos

The Camry TRD is too outspoken. Like a Honda Civic Type R, it's littered with trinkets like badges, spoilers and black accents. Of course, this is also backed up by some performance, though not enough to support having that wing at the back.

More specifically, the TRD features a 3.5-liter V6 with 24 valves and a DOHC configuration, hooked up to an 8-speed automatic. Its output is 301 horsepower and 267 lb-ft of torque.

Since the Honda Accord switched to a 2-liter turbo, the most direct class rival for the TRD would be an Acura TLX, though that's an old model that's about to be replaced soon. Instead, the guys at TFL decided it would be best to compare the Toyota against the most potent Mazda6.

It doesn't have an aggressive body kit or raspy exhaust, but under the hood of the Mazda is a 2.5-liter turbo making 250 hp on premium gas or 227 hp on the regular stuff. Torque is perhaps more impressive at 310 lb-ft.

The outcome of this drag race is not what you'd expect when comparing a 301 horsepower car against a 250 hp one. The altitude where this is filmed, at a mile above sea level, also plays a part here. Turbocharging gives the Mazda access to oxygen while the Camry is choking a little. But it's such a huge gap that nobody knew about until now.

The Mazda6 doesn't look particularly sporty, but we've always felt it was ready to go whenever we drove one. Rumor has it that for the next generation, this car will have a rear-wheel-drive platform and inline-6 engine. 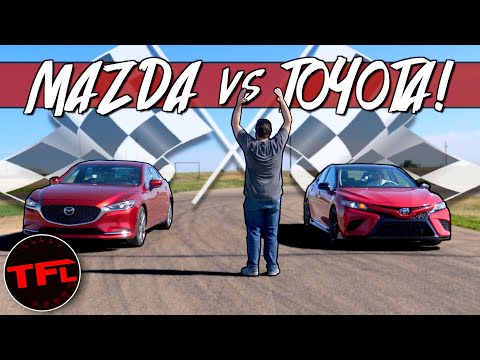