At first glance, the all-new BMW X4 isn't that different from its predecessor. But you'd be surprised by how much they've changed.
6 photos

This official video from the Bavarian carmaker walks us through all the major changes. At the front, the design upgrades are similar to those witnessed by the X3. The kidney grilles are both wider and taller, featuring active shutters that close off for streamlining.

BMW resisted the urge to connect the headlights, and we're kind of wishing they didn't. There's a disconnect between the sportiness at the back of the X4 and the premium front.

The taillight design has a similar vibe to the Mercedes-Benz GLC-Class Coupe. They are long, narrow and also defined y the spoiler effect that's been cared into the trunk lid.

While the X4's first incarnation had its number plate over the trunk, this has now migrated further down. Also, we appreciate the larger exhaust tips of the M40i and M40d.

In profile, the crease over the hood is less pronounced, while the roof line is higher over the rear seats for better headroom. Rather than explain ever crease, we'll let the photos do the talking.

Inside, the digital dashboard and tablet-like iDrive system are the main talking points. However, BMW also points out the ambient lighting and materials used. A bigger panoramic sunroof and thickly bolstered sports seats are among the options we love on the new X4.

Excited? The 2019 BMW X4 will go on sale in America this July, priced from $50,450. The hottie in this video is the M40i with a 3-liter turbo and a sticker of $60,450. Until the X4 M arrives next year, this will be the most powerful and fastest version. Would you take it over a Volvo wagon or the Mercedes GLC Coupe? It's pretty close in our book. 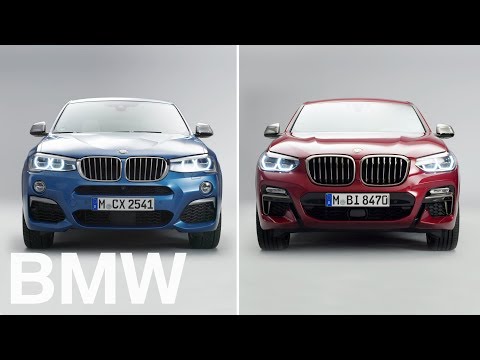