5 This Custom Dash Mod Brings an iPad to the Scion xB
Car video reviews:
Up Next

The benefits of having a full tablet in the dashboard are more than obvious, and most likely, those who want to replace the factory-installed screen with an iPad are drooling over the increased screen estate more than anything else.
5 photos

Just look at this latest project conducted by YouTuber Soundman Car Audio, as this time he installed a large 11-inch iPad Pro in a 2018 Ram. The dash kit that’s been fitted in the Ram also supports a 10.9-inch iPad Air, but in theory, the screen estate is nearly identical.

As you can see for yourselves in the video embedded below, the dash kit has been designed in such a way that the driver can always remove the iPad and still access the factory-installed screen, which means that you’re not losing anything if you perform this upgrade.

And of course, everything looks as premium as it gets, so overall, the custom dash is so nice you could easily be tricked to believe it’s factory equipment.

A full iPad in the dashboard also provides access to the full collection of apps available in the App Store because as compared to CarPlay, which is limited only to driving-related apps, the tablet comes with no limitation in this regard.

So of course, you can also install the likes of Netflix and HBO, though it goes without saying you shouldn’t launch them unless you’re parked. But these still come in super-handy when waiting to pick up your kids from school.

The best thing about this custom dash mod is that you can easily remove the tablet if you want, so if you leave your car parked on the street, it takes just a second to disconnect the iPad and take it with you. And if this is your main productivity device, it makes even more sense, as the iPad can therefore become your number one companion at home, at work, and now in the car too. 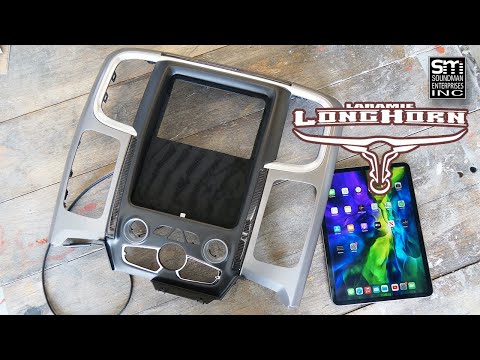