RAM Trucks introduced a new facelift for the 2500 lineup in 2015 as a 2016 model and further improved the pickup in all areas.

While the 2010 model was a completely new vehicle, the 2016 version expanded the customers' options for the big 2500. Unlike other competitors, the four-door Crew-Cab was not the biggest in its family. That award went to the Mega Cab version, which provided a lunge-sized rear seat area. But the Crew Cab was fit for a family and could tow more than any other pickup in its class.

The exterior looked different depending on the trim level and options. While the base models featured black bumpers and were only available in white, the top-spec model featured chromed front fascia and bumper. It sported more chrome on the front than many regular cars on the entire bodywork. From its sides, the grille and the headlights looked raked-forward due to the turn signals shape. On top of its class was the Power Wagon, which was built for difficult off-road situations. It sported 32" BF Goodrich tires, a 12.000 lbs (5.4 tons) electric winch, and two-tone paint.

Inside, the base model was the Tradesman, which featured cranked windows and vinyl seats both front and back. That was the workhorse of the family, but for the higher trim levels, such as the Laramie, Big Horn, or Lone Star, featured heated steering wheels, Uconnect 8.4" touch-screen, and power everything. RAM built those for work and personal use as well.

Under the hood, the Crew Cab received a wide engine choice starting with a 5.6-liter V-8 and going up to a 6.4-liter Hemi. The diesel versions sported towing hooks at the front, and Cummins provided the 6.7-liter inline-six engines. 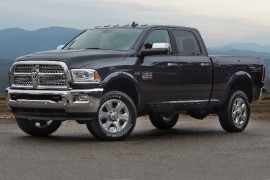