While CarPlay and Android Auto are both features that are gaining more traction in the car world, having a fully-featured tablet in the dash comes with obvious benefits, and the first one is access to the entire mobile app ecosystem.
6 photos

In other words, instead of sticking with apps that are only optimized for driving, you can install and run pretty much anything you find in the Google Play Store and Apple’s App Store, including the likes of Netflix and HBO Max. But of course, you shouldn’t use them while driving, though they still come in super handy when parked and waiting to pick up your kids from school.

While a tablet holder is pretty much the easiest way to use an iPad in your car, if you want to keep everything as clean as possible, a custom dash mod is the best option.

Of course, that requires advanced skills and resources to build it, though the result could end up looking as premium as it gets. The living proof is this video published by Soundman Car Audio, who recently installed a 12.9-inch iPad Pro in a 2015 Ford F-150 using a custom dash.

As you can see in the video, everything looks like it comes from the factory. However, some modifications have been required, including removing the center row of buttons because otherwise, a large screen wouldn’t fit the dashboard.

“Today's customer sent in his 2015 Ford F-150 dash bezel. He requested a 12.9" iPad PRO mount with OEM screen retention. I relocated the hazard/traction switches to the top of the panel and deleted the center row of buttons that sat below the factory screen,” the YouTuber explains.

The custom dash comes with a charger and everything, and the iPad can be removed easily if you want to take it home after parking the car. Of course, there’s still a cutout for the factory-installed screen, though who needs that when you now have a large iPad in the dash? 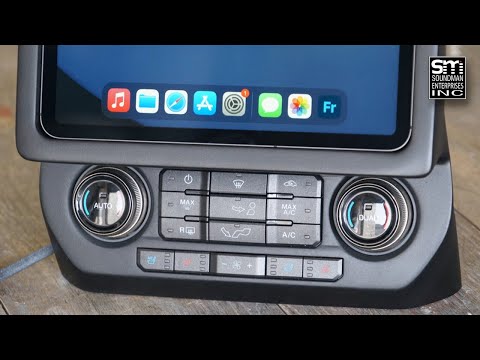