RAM 2500 was the only pickup on the market which offered a bigger cabin than a double-cab version and named it Mega Cab.

The carmaker introduced a new generation in 2010, and it took it six years to get an updated version. It was the kind of vehicle where the owner didn't even need a tent if it went camping. The Mega Cab version was large enough to be considered a motorhome.

RAM offered different looks for different trim levels, but the Mega Cab was not available in the base levels with black bumpers. Most customers went for the Limited version, which sported a new crosshair styling with the bold RAM lettering. The full-options version wore a chromed mesh as well, while on the lower versions, it was black. Its extended cabin featured a thicker C-pillar.

Inside, the carmaker installed an interior fit for up to five adults. Behind the rear bench, the Mega Cab featured a storage area ideal for fishing rods, rifles, or tools for a job. For the Laramie, Big Horn, or Lone Star trim level, RAM installed heated steering wheel, the Uconnect 8.4" touch-screen infotainment system, and power seats.

Under the hood, the Mega Cab offered a wide engine choice starting with a 5.6-liter V-8 and going up to a 6.4-liter Hemi. The diesel versions sported towing hooks at the front, and Cummins provided the 6.7-liter inline-six engines. 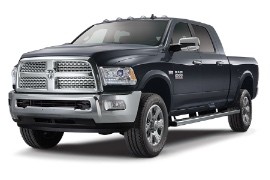 3 Are Ram Trucks Built for Tailgating? This Witty Ad Says They Are

4 Ram's Going To Join the EV Game in November, But Only With a Concept