First introduced in 2009 as Dodge Ram, the 2015 model was rebadged as RAM Trucks and followed the same numbering system that showed the payload.

In 2010, RAM Trucks was separated by Dodge and acted like a different brand inside the Chrysler group. There were hard times for one of the "Big Three," and after dodging the bankruptcy bullet, it ended up in Fiat's courtyard, and its products had to be more appealing to the market. The customers appreciated the Ram in the pickup industry, but the best-selling crown was still in Ford's HQ.

The 2015 Ram Quad Cab was the shortest version with four-doors in the lineup. It was designed mostly for light jobs that required four or five people and a light load in the bed. It featured the cross-hair grille style at the front that stood taller than the headlights area. From its sides, the rear shorter doors offered more straightforward access to the back seats. It was available in only one length option.

Inside, the carmaker had to make some adjustments to the dashboard in order to get higher grades from the IIHS crash-tests. Inside the instrument cluster, the carmaker installed a TFT display between the speedometer and tachometer, in addition to the other four gauges needed for fuel, temperature, oil pressure, and charging.

The biggest surprises were between the chassis and the bodywork. On the front, there was a new, 3.0-liter turbo-diesel engine. Its low-end torque and fuel-efficiency was a great competition over Chevrolet or Ford full-size trucks. The 8-speed ZF transmission offered for the 5.7-liter Hemi engine was another significant improvement due to its smooth gear-change. In the back, RAM added a new option for air-suspension to the list. 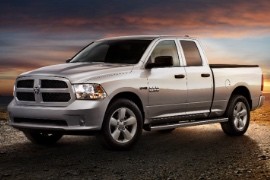