Last year, during the same event, KTM unveiled the 790 Duke concept model, also known as The Scalpel. One year later and here we are with the bike maker pulling the wraps off of the full production version that comes with a spec sheet that will make an impact in the naked segment.
6 photos

The 2018 KTM 790 Duke is described as the company’s sharpest tool in the shed, built with one thing in mind - to dominate the street through power and agility. For this reason, the engineers went with an extra strong CroMo steel chassis combined with KTM’s first inline twin - the LC8c, with ‘c’ standing for compact.

The latter displaces 799 cc and cranks 105 horsepower (77 kW). KTM said nothing about torque, but considering it’s a high-compression two-cylinder, it should be more than enough to pop wheelies and shred the tire.

Power delivery goes through a six-speed manual gearbox fitted with an anti-hopping clutch, and there’s even a quickshifter system mounted from the factory allowing both up- and downshifts without pulling the clutch lever.

But that’s not all, as the 790 Duke comes with a lot of other advanced electronics. Besides the standard ABS, you also benefit from four riding modes (Sport, Street, Rain, Track), traction control, and Motor Slip Regulation (MSR), which is an engine brake control. If due to shifting down or abrupt throttle-off, the engine drag torque is too high, the ride-by-wire system balances the throttle exactly as much as is needed to ensure a controlled deceleration.

The front end is fitted with four-piston radial calipers biting on dual disc brakes and a 43 mm upside-down fork, which handles the compression and rebound damping in separate tubes. The springs are also progressive, assuring a smooth operation throughout the stroke and preventing bottoming out.

The rear uses a gas-assisted WP shock with progressive spring and preload adjustment, and, in late KTM style, the rear subframe is exposed, also housing the airbox and allowing the engine to ‘breathe’ colder air.

The new KTM 790 Duke is expected to reach dealers sometime next year, and it can be had in two color setups - gray on black or gray/orange on black. Further customization is possible through a wide range of accessories including billet parts, phone/GPS mounts, bar-end mirrors, handlebar risers, crash pads, and more. 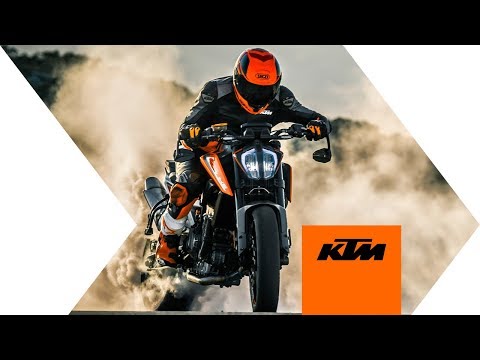