3 Behold, the Lotus 3-Eleven Is Going into Production and Will Soon Hit the Streets

5 Lotus 3-Eleven Set Loose on Nurburgring, Certainly Looks Like the Fastest Lotus Ever
Car video reviews:
Up Next

The Reasons McLaren Refuses To Sell Its F1 Team to Audi

2017 Lotus 3-Eleven Looks Like a Toy Next to Trucks on the Highway, It's Still Fast

Lotus's 3-Eleven, the company's ultimate road-going track tool in its day, is just as impressive today as it was when it was first launched on the market. We are writing about a street-legal roadster without a windshield, but with over 400 horsepower per ton.
7 photos

While the press images and various test drives have involved seeing it alone, once you see it next to a different vehicle, perspective sets in. An owner kindly lent out his pride and joy to be driven on the German Autobahn, as well as on country roads next to the sections without any speed restrictions, just for a review.

Thankfully, there is a high-definition video of the entire thing, and we get to see what the 3-Eleven sounds like, as well as how quickly it can go through the gears. The track-focused model can be driven on public roads, so it has every right to be on the highway, but be sure you do so when the weather is in your favor, as you will get wet if it starts to rain.

The Lotus 3-Eleven was offered in both a Race, and a Road version, and the latter needs 3.3 seconds to sprint from naught to 60 mph (97 kph). It still has a limited-slip differential, a close-ratio- six-speed manual transmission, and all the other goodies that one would expect from a vehicle like this, such as a flat floor.

While some brave individuals might use this vehicle as a daily driver, most people might only drive it on special occasions. The owner of this example, which is for sale, drove 12,000 kilometers (ca. 7,456 miles) in it since the vehicle was acquired new, back in 2017. Yes, we cannot believe that was five years ago, either.

The owner describes himself as "a true fanatic," and notes that they ordered an Ariel Atom 4. Previously, the same person owned two Ariel Atom models, a KTM X-Bow, and even a BAC Mono. So yes, you might say that the owner likes roadsters with as much power as possible.

It will not come cheap for someone to own a rare Lotus, as it is currently priced at EUR 114,900 (ca. $123,312). Since you cannot find too many Lotus 3-Elevens for sale these days, it could be a sweet deal for someone looking for a vehicle from this category.

If you may not be within your budget to get a car like this, at least you can watch it for free below, which is not the same as driving it or riding in one, but better than just looking at pictures and letting your imagination do the rest, right? 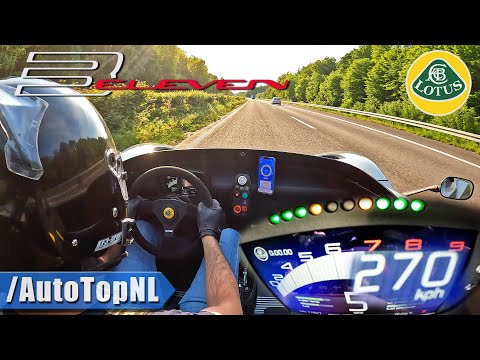