The first mainstream electric car in the world was based on a Lotus chassis: the Tesla Roadster. Now, Lotus launches its first full-electric supercar. And when Lotus says supercar, it means it. The new Evija can put Tesla's models into a risky situation on the drag-strip.

Lotus is the only British car-manufacturer that was concerned only about sports cars or, as a compromise, fast cars. Now it has returned on the market with the new Evija supercar. A car built with motorsport heritage and racing technologies.

Inside, there are a lot of aircraft-inspired controls. The steering wheel is not quite a wheel. It is more like a rectangle with buttons. Lots of buttons. On the center console, there is a bar with lots of buttons for various functions of the vehicle. But, the most important things are on the performance side.

The Evija features four 500 hp electric motors, each mounted transversally on the front and rear axles of the car. They are monitored and controlled by computers. In total, they are producing a massive 1700 Nm (1,253 lb-ft) of torque. The engines are powered by a battery pack supplied by Williams Advanced Engineering as a part of a joint-venture with Lotus on advanced propulsion technologies. It has a 2000 kWh capacity and it can ensure a WLTP range of 400 km (250 miles). The sprint from 0 to 62 mph (100 kph) takes less than three seconds, 62-125 mph (100-200 kph) takes another three seconds and the 124-186 mph (200-300 kph) sprint is achieved in another four seconds. The maximum speed is 211 mph (340 kph). 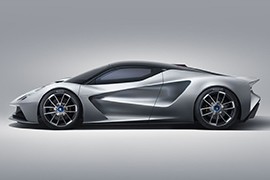