Lotus probably had a "keep-it-light" banner in their cafeteria that made them take the newly introduced Evora 400 and turned it into the 410 model.

In March 2016, the British carmaker unveiled a new version of the Evora model. Its engineers burned the midnight oil and consumed gallons of coffee to find new ways to reduce the car's weight. They shaved 70 kg (154.3 lbs) from the Evora 400.

Lotus' design team had an even more challenging job making the car look different without adding more weight. They replaced the aerodynamic package with a carbon-fiber one. That included the front splitter, the roof, tailgate, and rear diffuser, and they left all of these unpainted. The engine cover incorporated a louvered section, inspired by some of the company's most famous heritage models. With the new rear carbon-fiber panels, the new aerodynamic package improved the car's downforce by 15% with no increase in drag.

Inside, the sport bucket-seats with high bolstering were based on a carbon-fiber frame. They were padded with Alcantara. The same material was used for the steering wheel and the center console. For the infotainment system, Lotus introduced a new device that featured iPod and Bluetooth connectivity. Other weight-saving methods included the deletion of door armrests and storage pockets.

Under the hood, Lotus' engineers squeezed ten more ponies from the Toyota-sourced V-6 engine. They paired it to a six-speed manual with a light flywheel and sent the power to the rear wheels via a limited-slip differential. 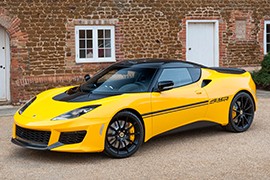 3 2017 Lotus 3-Eleven Looks Like a Toy Next to Trucks on the Highway, It's Still Fast