3 Philadelphia Charity Drive Turns Into Ferrari Carnage For 458, 488 and 488 Pista

Shortly after Enzo revealed the first-ever Ferrari, the one they call Il Commendatore knew that he needed to sell road-going cars to fund his racing efforts. At one point, a man by the name of Bill Harrah asked the automaker’s founder to build a four-wheel-drive Ferrari after crashing his 365 GT 2+2 during an ice storm, but Enzo didn’t take him seriously at all.
14 photos

It wasn’t personal, though. Il Grande Vecchio may have preferred four-seat gran turismos over sports cars, but he never accepted to compromise the motorsport-focused company with a utility vehicle. Now under the control of famous industrialist John Elkann, Ferrari is stepping over Enzo’s legacy with the five-door Purosangue, the marque’s first-ever sport utility vehicle.

Long before the late Sergio Marchionne uttered “you have to shoot me first” when asked about the Purosangue, the extravagant Bill Harrah took matters into his own hands by uniting the front of his 365 GT 2+2 with a brand-new Jeep Wagoneer to create the Jerrari. The contraption in the photo gallery is that SUV, and it doesn’t feature the glorious Colombo V12 under its hood.

Although the front fascia exhibits the unmistakable lines and gracious details of a classic Ferrari, the green-painted monster features a small-block V8 engine. The long-lived 350 is the culprit, and heaven only knows how many ponies it develops today. The 5.7-liter motor was introduced as the L48 in the 1967 Chevrolet Camaro, and in that application, it was rated at 295 horsepower and 380 pound-feet (515 Nm) of torque from 3,200 revs.

Definitely not as exotic as the 365 GT 2+2's mill, the small-block V8 drives all four wheels by means of a BorgWarner four-speed automatic transmission. Presented in excellent condition both inside and out, the Jerrari is up for grabs on Classic Driver with ridiculously low miles. Unfortunately for anyone interested in this four-wheel-drive Frankenstein, the private seller hasn’t mentioned how much he wants for the Purosangue's unofficial grandpa. 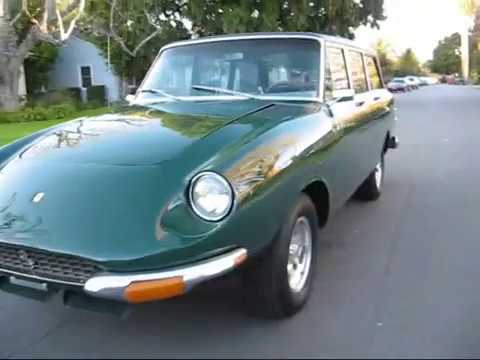