At first glance, this project might seem inspired by the odd look of the classic GT350H Mustangs created for Hertz. Still, we have a feeling that no one should mention the nickname Eleanor when in vicinity of this restomod. We'll admit the black and yellow stripes attire is pretty tasty on its own, especially when seeing the rest of the elements that were treated to the latter shade.
59 photos

In a world full of many custom Ford Mustang builds, it’s always hard to stand out in a crowd. This 1968 restomod won’t have that problem, though, as it clearly deserves some attention. And it’s not just the paint job – which looks as if it just came out of the shop although it’s been finished for some months already – because the bespoke side exhausts also make sure their story is heard loud and clear.

Shawn, the host of the AutotopiaLA YouTube channel, presents this build as another example of the handiwork of Ricardo from Customs by Lopez. Sure enough, we easily found it on the shop’s social media account flashing those intriguing LED rings that seem to have been specifically adapted to shine yellow – just a little detail to match the yellow striping.

There’s even more of the shade underneath the fiberglass body kit (it turns out the Mustang donor was quite a mess when work started), which brings us to a moment of bewilderment. That’s because the owner says there’s an IRS (independent rear suspension) underneath the ‘Stang, but in the video presentation (at the 3:15 mark), we’re looking at a very yellow, very solid axle.

Well, hopefully, they’ll get that sorted out by the time they finish setting up the suspension properly (the guy mentions there’s still a work in progress situation), but we can be sure the 427 Windsor engine is not going anyway. You can check it out when the engine hood gets popped up at the 2:05 minute mark.

After Shawn gets surprised by the fact that he’s not greeted by a Coyote or LS, we find out the powerplant is serious with its meaty 550 horsepower, although it might get covered by the audio show of force seen inside the cabin at 4:45.

Just like our host, we’re more interested in the soundtrack provided by the side exhaust assembly rather than hearing any tunes coming out those massive speakers thanks to a couple of 1,000-watt amps located in the trunk compartment. We also enjoyed another neat detail from the interior chapter (from 5:20) - the Classic Instruments still feature the iconic Cobra logo.

It’s time for the customary drive from the 6:20 mark, where Shawn not only manhandles the Tremec five-speed gearbox or the manual brakes but – above all – plays with the settings for the side exhausts. Yes, we know he’s a huge fan of this treatment, but it seems his film crew shares his opinion as well, as we see some of them asking Shawn to keep the cutouts open. 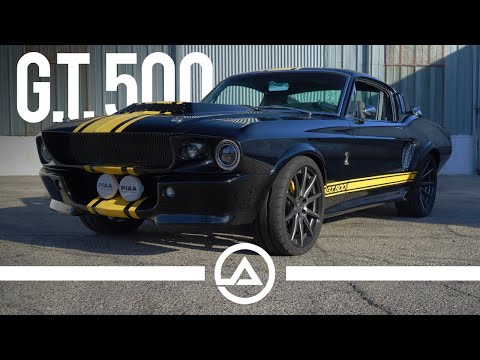