3 Migma Concept Shows the Beautiful, Hydrogen-Powered Catamaran of the Future

4 No, Bill Gates Did Not Buy World’s First Hydrogen-Powered Superyacht, The Aqua

If we’re to indulge in fantasies, we might as well make them truly outstanding. As the yachting industry is looking ahead into the future, it’s hoping it will be a more sustainable, efficient and cost-saving one. It might sound a bit too dramatic, but everybody wins if our planet wins.

ZeRo Superyacht Is a Beautiful, Hydrogen-Powered Dream for a Clean Future

The marine industry remains a major source of pollution, and this includes shipping, the cruise industry and the personal superyacht segment. Current trends meant to cut down on emissions include solar-power vessels or hybrid powertrains, but realistically speaking, we’re still a great distance away from seeing fully sustainable vessels with wide adoption.

At some distance into the future is the ZeRo hydrogen-powered superyacht, perhaps one of the most striking concepts to have come out of this year’s edition of the Monaco Yacht Show. It’s the latest project from Australia-based Sorgiovanni Design studio, a veteran on the superyacht scene both as regards actual builds and outstanding concepts. Notable Sorgiovanni designs include Nirvana, Barbara and White Rabbit, and the Frontier superyacht explorer.

ZeRo imagines the brightest future of luxury seafaring: it is hydrogen-powered and thus completely emissions-, noise- and vibration-free, and still impossibly luxurious. Fueled by hydrogen, it only emits water, offers long range and the complete package of green credentials, but in a form that is timelessly classic, packing all the amenities one-percenters can’t live without.

“My vision for ZeRo was to create a futuristic, wholistic form while maintaining a timeless elegance with the hull embracing the superstructure to create a striking yet sleek hull form and restrained superstructure,” designer Sam Sorgiovanni said of the project.

Measuring 315 feet (96 meters) and spanning several decks, specifics of the ZeRo were never published. The design studio notes that the study could be further developed if an interested party came along.

As of the moment of press, what is known is that ZeRo features a semi-planing hull with a sharp bow for increased efficiency and stability, and higher performance. In other words, higher speeds but without compromise in terms of smoothness of the ride. The powertrain features hydrogen tanks and hydrogen fuel cells, with electric engines and storage battery. The combination of the two, the hull and the powertrain, would allow ZeRo to travel at high speeds on extended cruises, with zero carbon impact.

The interior would be on par with current expectations for a modern superyacht, based on the renders. In typical Sorgiovanni style, ZeRo features large open spaces for socializing, a generously-sized beach club with a pool and lounge area, sun decks and outdoor dining, and storage for at least a couple of matching tenders. There’s also expansive smoked glazing for maximum privacy.

To preserve the sleek, futuristic silhouette of the superstructure, Sorgiovanni hid a touch-and-go helipad at the bow of the ship. This is no regular helipad, though. The area is actually for a personal drone, of the kind that is far away into the future, which gives you an idea of when something like ZeRo might actually be built.

Hydrogen fuel cells are considered a solid alternative for sustainable transportation but it’s equally well-known that it’s one that poses serious challenges, like storage and production, charging and costs. With all this, yacht designers do dream of the day when hydrogen-powered superyachts might become norm, and ZeRo is just the most recent example.

The project that aims to become the first fully hydrogen-powered superyacht in the world is the aptly named Aqua, from Sinot Yacht & Architecture Design. At one point, it was said that Bill Gates had bought the 367-foot (112-meter) concept and would have it built, but as likely as the rumors seemed, they were later refuted.

Theoretically, Aqua would run on liquid hydrogen, using two tanks to store it, vacuum sealed at -423 degrees Fahrenheit (-253 degrees Celsius). Proton exchange membrane fuel cells (PEMs) would then convert the liquid hydrogen into electrical energy, for propulsion and to power auxiliary systems. Sinot imagines Aqua would deliver 17 knots at full speed, and a range of 3,750 miles.

ZeRo is in excellent, gorgeous company. 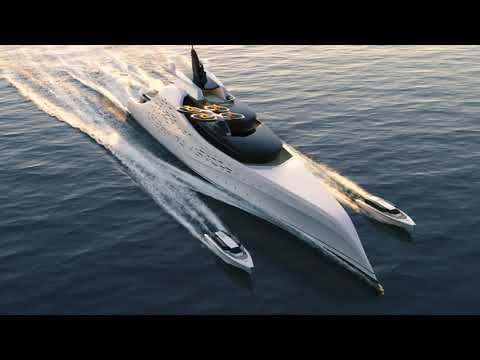