5 China Does Things Big! At Least Thirty E-bikes per Order Big. Dirt Cheap, Too
Car video reviews:
Up Next

We understand why you come to us every day. Because we let you know of the best, coolest, and even weirdest designs in anything mechanical in nature. This time, it’s about a future e-bike.

ZBike Z2 Off-Road E-Bike Is About to Trek Worldwide, San Francisco to Berlin

It’s not really just an e-bike. This specimen is known as the Z2 from ZBike, and it’s the kind of creature that’s like the offspring of a mountain bike and an enduro motorcycle. You pick who ate who at the end of that mating session.

From the start you know this monstrosity isn’t meant for the streets like the Platzhirsch. That huge and industrial-looking frame tells you it can take a beating. And if we look closer, we will ultimately accept this perspective.

That frame is made of aviation-grade aluminum alloy. This is strong enough to carry the massive battery and motor. But it can also do this while you’re hitting some jumps. Oh, and it’s waterproof to keep your components safe. Watch the video below to see a bit of what it can take.

Now, before we get into the thick of it, know that this line comes with three different bikes. For the sake of it we’re just going to talk about the Pro version. The bikes haven't begun production yet, so you can still grab an early bird on Indiegogo. The Pro will run you around $5,700 (4,900 euro), but once the early bird is up, so is the price. It jumps to $9,929 (8,449 Euro).

Just to kick it all off, we find a 1000W Bafang mid drive engine that allows you to either ride assisted or to just use the bike's ten gears the classic way, by kicking those legs. But that will only take you so far as the bike does weight 73 lbs (33 kg). Knowing this, the team at Zbike made sure this Bafang can take you up to 28 mph (45 kph). Four different drive modes allow you to select different levels of engagement from the motor, from none to full blast.

But a strong and durable motor isn’t all we bikers want. We also want to get far with it. But that depends on the battery. Zbike knows this without a doubt. They’ve strapped a 1.5 kWh 32Ah 48V lithium-ion battery, allowing for a max of 124 miles (200 km) in optimum conditions, nearly double the range other e-bikes out there offer. If you were wondering where the battery is hidden, the frame should have been a hint. One downside of such a massive battery is its recharge time - 5.3 hours is what is needed for the pro version.

Suspension is offered by Rockshox and braking is possible courtesy of Magura MT5 eStop disks. More than enough to bring you down from those 28 mph.

What’s nice about the bike is that the Pro version is equipped with a thumb throttle making it really easy to just get on and go. You can even strap on a child carrier to it and drag the little ones along. Although, I'm not so sure what taking them off-road might be like. Maybe you end up raising some dirt-devils like yourself. 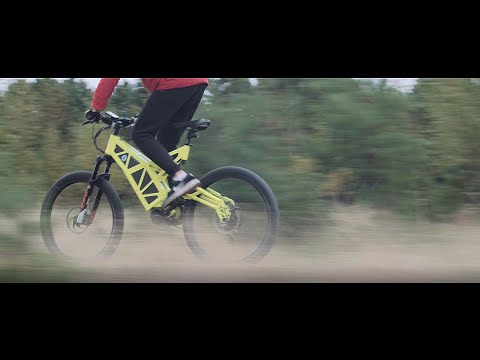