5 Donk Drags Demon, Race Ends With Blown Engine, Owner Takes It Like a Man
Car video reviews:
Up Next

End of the Road for the Renault Scenic, Grand Scenic Will Meet the Same Fate Soon

Usually, the videographer behind the Race Your Ride account on YouTube brings us cool dragstrip stories of vintage rides and classic muscle cars from the Byron Dragway (Illinois) homestead. Alas, there are also modern exceptions.
21 photos

This YT channel is great for everyone who loves the feisty action at the quarter-mile dragstrip but also wants to check out many goodies from the glorious past. And the videographer indiscriminately shows everything that is catchy, odd, or just plain and simple quick – from patina twin-turbo BBC milk truck drag racers to 1980s sleeper wagons and everything in between. Sometimes, though, he also gives us contemporary food for thought, probably just to show that not everything neat is from the past century.

As always, there is the most thorough description possible, thus putting the technical aspects into the proper perspective. So, this GR Supra might not be the most powerful out there at 382 horsepower against a 2018 Chevy Camaro SS 1LE performance package’s 455 horsepower and a 2016 Mercedes-Benz S 550 Coupe’s 449 hp V8 mills, but it sure is lighter than both.

That means all bets are off, and it might be down to driver skill and how power is being sent to the ground rather than sheer hp and torque numbers. The first race, against the GM representative of America, kicks off at the 0:16 mark with a better reaction time from the Chevy driver, but the GR Supra still manages to narrowly come up on top with a 12.37s pass against the opponent’s 12.59s run.

Then, it’s Germany vs. Japan on U.S. soil, though we can all agree with the conclusion that 12.42s lightness is way better than 13.24s bulkiness, right? 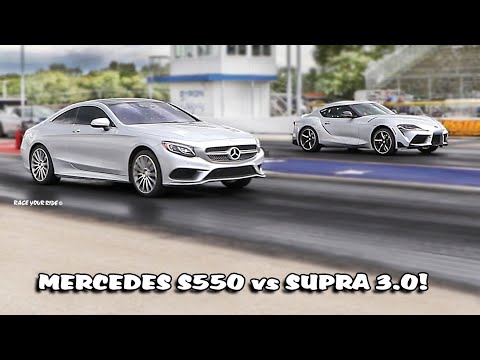