4 Someone Designed and Built a Wooden Teardrop Camper for Cats

There's really no need to make it clear that automotive lovers come in all shapes and sizes. One master woodworker has even achieved the impossible and built what could be the world's smallest functioning V8 engine.

Maybe what you just read is a bit confusing, so allow me to take up about five minutes of your time to clear things up for you. In autoevolution’s search to bring you all things automotive, we sometimes run across projects so unimaginable that we just have to show them to you.

One recent post on YouTube brings to light the achievement of a master woodworker in being able to produce a V8 engine that’s about the size of a quarter. Why did Generic Woodworking (GW) create such a video? Simple, to test the engineer's (simas1014 on Reddit) ability to make something like this, and for just pure fun.

In order to make something so small while making sure it remains functional, simplicity is your best friend. So, the overall design has been reduced to just a few components that do, in fact, mimic the functioning movements of a real V8. But there is a catch. It's wood! That means combustion won’t be included in the overall functionality of the motor; no fire.

The video, posted below, takes you on a journey so documented, that, with a tad of machining knowledge, you could build your very own mini V8 engine too. Step one is to make a diagram of every piece, with measurements down to millimeters, and then gather your necessary materials and equipment. Ready? Good.

Now, step two seems to have come rather quickly in the video and already shows simas1014 at work measuring what will become the engine blocks. Once measurements are in place, he starts making holes with a vertical drill to create the piston chambers. With those in place, a final cut creates two in-line four halves that will eventually be set in a classic ‘V’ shape.

Up next, it was time to create one very important feature of the motor, the crankshaft and pistons. No camshafts will be needed here as no air or fuel will be in the mix. Get it, mix? Counterweights and webs don’t seem to have much of a role in this motor as it’s externally powered, but their form and function are still used for piston timing or “firing.”

Once these components are prepared, and pistons carved out of a bar-be-que skewer, it was time to put it all together. Only one problem, how? It's here that simas1014 strays away from wood as a base material and incorporates little metal pins that do just that, become the piston’s wrist pins. I'm guessing these are used as those piston heads really get moving once that drill is fired up. You'll see what I mean in the video.

With all pieces completed and ready to be put to good use, simas1014 begins to create the crankshaft, inclusive of pistons, wrist pins, connecting rods, and counterweights. Everything in place, it’s time to lube things up so that the pistons can be set into the block.

With some help from a blade tip, simas1014 inserts all pistons in place and begins to spin the crankshaft. What happens next made me write this article for you.

The only thing this engine is missing is a tiny wooden car in which to put it in; it performs like a champ. Around minute 5:45 of the video, simas1014 clips a drill to the end of the crankshaft and those little pistons begin moving so fast that at one point they don’t look like they’re moving at all. I’d love to see what this engineer will be doing in the next years. 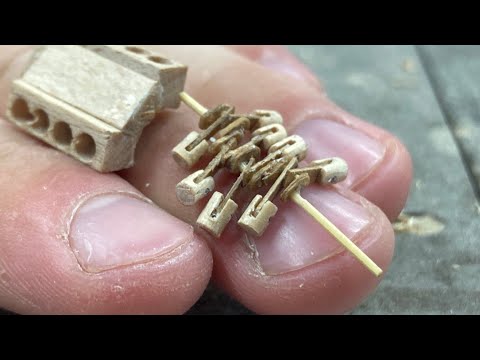