3 Peak DUI: Drunk Man Crashes Honda SUV, Drives It to the Nearest Dealer to Sell It

4 You’re Too Drunk When You Start Kicking, Jumping on Supercars, Go Home

Worst Parking Skills: Driver Falls Out of the Car, While Backing Into Stationary Vehicle

You know how people will try to console or comfort you when you’re having a bad day, by telling you that “it could always be worse”? This is exactly what the latest viral video is: a visual representation of that cliché.
7 photos

Reverse parking or backing out of a parking spot can be tricky, but they’re nowhere as tricky as shown here. Viral Hog has video of an incident that occurred at the end of May this year, in Newark, Delaware, U.S., and was captured on a doorbell camera. The caption of the video reveals that it was shared online by the owner of the stationary vehicle that got banged up by an out of control Hyundai Santa Fe.

“My car was hit while parked,” reads the caption. “The girl lost control of her car and it went back into my car. She then fell out and had to chase her car down.”

That sounds like an insane description, especially for an incident that occurred at very low speed, in a small section of the road separating two driveways. But it is accurate, as the video below will show: it starts with the dark Santa Fe backing out from its parking spot, before picking up speed, and hitting a stationary Hyundai Venue, then turning and smashing through a bunch of trash bins.

Perhaps the strangest part is that the driver of the moving car appears seemingly out of nowhere, getting up from the ground near the parked Venue. She’d fallen out of the car after the door opened, or she opened it for whatever reason. Panicked, she runs towards her own car – which is still moving at this point – and tries to halt its progress, before she’s finally able to get inside and apply the brakes.

From her springly jump and run towards her vehicle, it doesn’t seem like the woman was hurt, so here’s to hoping this isn’t just adrenaline getting her to act so fast. Unless this was a medical emergency, it’s clear that mistakes were made – and then instantly regretted. 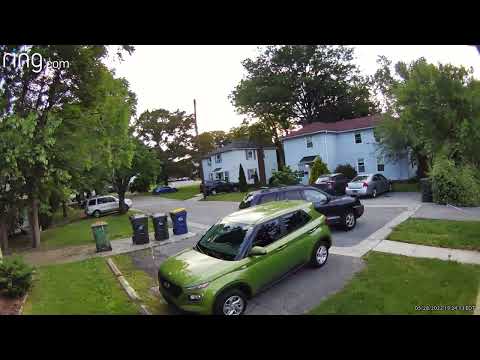