1 Science Says Mad Max: Fury Road Has the Most Heart-Pumping Car Chases Ever

3 The Wait for Fast and Furious Just Got Longer: Fast 9 Delayed Once More

4 Fast and Furious 9 Is Going to Space, Michelle Rodriguez Confirms

2020 Has Been the Worst Year for the Aviation Industry, Bar None

Elena Gorgan
You can tell when someone is a true fan – of anything – by the way they talk about that thing. Jorge may not be the most diehard fan of the Fast and Furious franchise, but he is definitely one of the most dedicated, having comprised what is being called the world’s largest collection of replica cars.
12 photos

The fifth episode of Roads Untraveled, which went live a couple of weeks ago and you can see in full below, is a treat for all fans of the longstanding film franchise. It’s their chance to virtually meet one of their own and to take in the wonderful sight of some of the most famous Fast and Furious vehicles, even if they’re not the real thing.

According to the description in the video, Jorge lives in Edmonton, Alberta, in Canada and he currently owns a garage in the countryside where he keeps his second most valued treasure (after his family): his collection of replica cars. He currently has 24 of them finished, from some of the most obscure to have appeared in the films to the most iconic ones, like Dom’s Charger. He has nine more in the works, so he estimates that, soon, he will have 35 completed replicas.

Jorge might stop after that, he says at one point: his wife keeps telling him he spends too much money on cars. He admits it’s true: he sources many vehicles from Japan and then scours the Internet for parts. This is costly stuff, due to what he calls the “Fast and Furious tax,” where people will scam you by overcharging for a part that could work on an FF replica. It’s also time-consuming stuff, with Jorge explaining how one replica can take many months to be completed after extensive talks with owners of the real hero cars from the films, or chats with like-minded hobbyists from the replica communities.

Fret not, though. By the end of the video, Jorge admits he might continue building Fast and Furious replicas well past his 35th completed unit. As for what got him started with this “hobby,” he says it’s the first race in the first Fast and Furious movie, which is when Paul Walker became his idol. He’s so enthusiastic about every project that he always gets too excited and carried away, which usually means he spends much more money than he should, he explains.

Some of the highlights in his collection are a Bayside Blue Nissan Skyline R34 GT-R, a Skyline GT-R, a Mazda RX-7 Veilside Fortune, the Charger (which he will replace with a more accurate replica soon, because he doesn’t want to modify this one too much), the orange Supra and the white Volkswagen Jetta from the first film.

Jorge admits that not all of his replicas are accurate, for a variety of reasons, but this collection is more than about churning out vehicles that resemble the originals down to a T. This is the most beautiful automotive love letter a fan ever wrote to a film franchise. 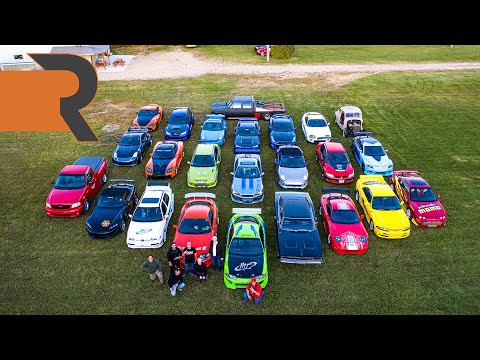