1 2023 Porsche 911 Hybrid Prototype Spied Again, It Is Definitely No PHEV

2 With the 911 Going Hybrid, Porsche Is Looking for an Electrifying Future

4 It Takes Work to Make a 993 Carrera S Look This Clean, but It Is Worth It

5 2022 Porsche 911 GT3 Is a Harmonized Racer, Celebration of Natural Aspiration Goodness
Car video reviews:
Up Next

Play the Millionaire Part Without Being One on an Affordable Element

Do you want to learn how to build a paint-to-sample Porsche 911 GT3? Well, take a seat and be ready to take notes as fast as humanly possible, as Porsche has presented a video of the entire process. While the video is four minutes long, it is clear it does take significantly longer to assemble a 911 from scratch, as we have previously witnessed.
27 photos

As you can observe in the video, robots do most of the work, but there are a few moments when human intervention is required. Those fortunate enough to have been on a factory tour know that the process, which was sped up significantly for the video, takes place every single day of production.

It does take training to become an assembly line worker, and this applies to any automaker, not just Porsche. In the latter case, the process you can see in the video below has 117 steps in total, and one day involves having the chassis getting ready for paint, while the latter involves the final assembly of a 911 GT3.

Despite the use of aluminum, diverse types of steel, and carbon fiber, the paint must cover them in the same way and get the same shade and finish. That is not negotiable.

The base coat is only 30 micrometers thick, which is about less than a third of the thickness of a standard piece of paper for your printer. The final layer, which is the clear coat, is between 30 and 50 micrometers thick, and it is then driver at 393 F (ca. 200 Celsius) for over two and a half hours.

The entire assembly process of a 911 takes two days, and each car is touched, in total, by about 1,500 workers, as Porsche notes. The example in question has been taken through the Paint to Sample program, which is something that the Porsche Exclusive Manufaktur department handles.

Just like other bespoke-related departments in a luxury brand, the Porsche Exclusive Manufaktur has a broader color palette available, and customers can even go the extra mile and order something just for them.

Porsche states that the Exclusive Manufaktur department has over 160 pre-approved paint options. If any of those is not what you are looking for, you can still get something just for yourself.

Porsche has an additional color mixing bank at its Zuffenhausen plant, and the company can complete more Paint to Sample configurations than ever before without slowing production.

Instead of being able to make just five cars a day in a Paint to Sample configuration, Porsche can now make 20 a day, and it means that the company can assemble 120 per calendar week.

The example that is seen below and in the photo gallery was ordered by Leh Keen, a professional racer who competes in the Porsche Carrera Cup North America. 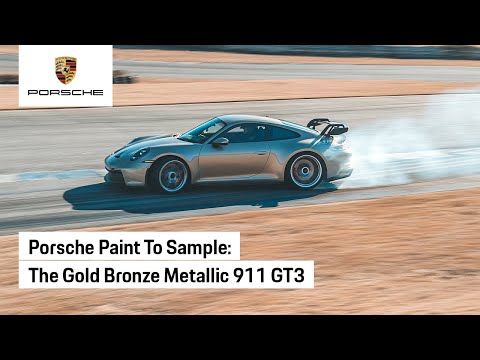 Editor's note: This article is not sponsored or supported by a third party.