2 C8 Corvettes Flock to the Nurburgring, Might Feature AWD and Hybrid Assistance

The 2024 Chevrolet Corvette made headlines a few times these past few weeks, with the most notable story being that of a prototype that was completely ruined by fire in Spain. It started a barbecue in the engine bay, and the flames then reached the battery pack.
11 photos

When the firefighters arrived at the scene, which was in a remote location, they couldn’t do anything for the pricey vehicle, which was reportedly being put to the test by supplier Bosch at the time.

As for the latest sighting, it was filmed last month, before the aforementioned prototype caught fire on the go, and we just stumbled upon it. The short video starts with the person holding the camera chasing after a tester on the roads of Germany, and then moves on to the Nurburgring for some action-filled footage that shows more prototypes in action, doing what they were built to do.

An apex-devouring beast, the Corvette E-Ray will gun for the likes of the Lamborghini Huracan successor in terms of layout and perhaps performance too, yet definitely not pricing, as it should be much more affordable. In the power department, it might retain the 6.2-liter V8 of the normal Stingray, which will be assisted by an electric motor, likely driving the front wheels, backed up by a battery pack. A total of 600 hp and 500 lb-ft (678 Nm) of torque should be available via the fun pedal.

The normal Corvette E-Ray could be joined by the rumored Zora, a high-performance variant with approximately 1,000 horsepower combined, and almost 1,000 pound-feet (1,355 Nm). This model is believed to pack the 5.5-liter V8 of the Z06, with electric assistance, and could be followed by an all-quiet zero-emission model. The hybrid ‘Vette will reportedly debut in 2023, and by the time it launches nationwide, it should be a 2024 model. 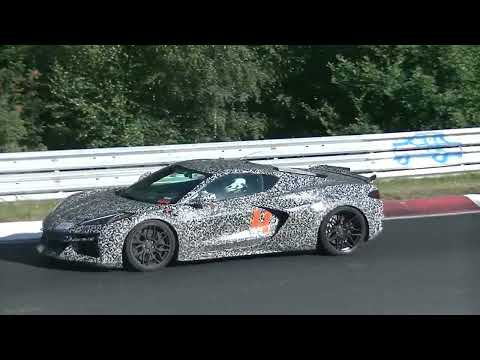