If you pretend the word ‘reliability’ doesn’t exist, then the BMW M5 from the E60 generation is arguably one of the best muscle sedans that you can go for. It comes with the luxury amenities typical for a car that came to life in the mid-2000s, albeit with a V10 twist.
6 photos

Sure, you might argue that it’s not competitive anymore in today’s car world, when we have mega hatchbacks such as the Mercedes-AMG A 45 S and Audi RS 3 Sportback that are almost one second faster. However, the E60 M5 provided more thrills for the driver and occupants, while cocooning them from the outside environment.

Also, with a little bit of work, it can give supercars a true run for their money. But can it stand its ground against the Ferrari F8 Tributo? As it happens, this white copy took on the Italian exotic at the Petrolhead Spring Event hosted on the other side of the pond, in the Old Continent, eager to prove its worth.

The action starts at the 2:36 mark, yet we’d recommend watching the entire clip, which is almost three and a half minutes long and starts with the E60 burning rubber. 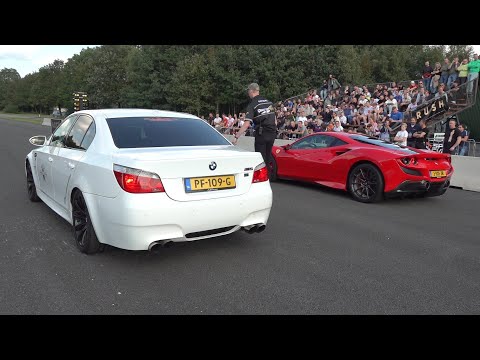