USS Gerald R. Ford Now Has 8,000 Aircraft Cats and Traps to Its Name

Home > News > Military Bits & Pieces
Daniel Patrascu
On the water for just a few short years, the USS Gerald R. Ford is presently America’s first vessel in what will sooner or later become the Gerald R. Ford-class of aircraft carriers. Operating from its homeport in Norfolk, Virginia, the ship just completed its 18-month post-delivery test and trials (PDT&T) period at the end of April.
4 photos

During this time, all of the ship’s systems were, of course, evaluated, and the results have been “exceptional” according to the Navy including as far as combat systems qualification trials are concerned.

As far as the carrier’s launch and recovery prowess is concerned, we are only now getting a taste of how testing went. The maker of the systems in charge of the safe launch and landing of the ship’s aircraft, General Atomics, was the one that shed light on these systems' performance earlier this week.

To launch aircraft, this particular carrier uses something called Electromagnetic Aircraft Launch System (EMALS). In simpler terms, it is a catapult that uses a linear induction motor to accelerate aircraft to take-off speed.

When they come back for landing, the planes are caught by that famous wire we all know by now. In the USS Gerald R. Ford application, the system is called Advanced Arresting Gear (AAG). It is designed to be suitable for a wider range of aircraft than existing systems, including UAVs.

During the 18-month PDT&T period, the General Atomics systems were responsible for over 8,000 successful aircraft launches and recoveries, with “over 400 pilots, including new student aviators” taking off and landing from the aircraft carrier during “night and day, all-weather, and various sea state operations," the company said. 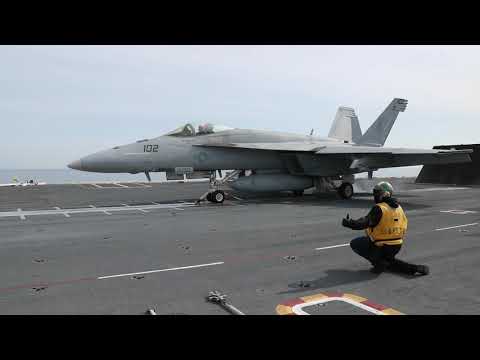