Chase Zero is not only turning heads but leaving everyone in awe with its incredible speed and range. The first hydrogen foiling chase boat that will take part in America’s Cup has blown everybody away with its performance during sea trials.
7 photos

Only a month ago, Chase Zero was hitting the water for the first time. Developed by the Emirates Team New Zealand (ETNZ) as part of its larger Hydrogen Project, it was designed to become the first chase boat powered by hydrogen fuel cells to participate in America’s Cup.

Sea trials were kicked off around the Waitemata harbor in Auckland, and Chase Zero had no trouble reaching the estimated top speed of over 50 knots (58 mph/93 kph) on its ninth day of testing. But what really blew everyone away was its range.

The team filled its four storage tanks up to 96% and set out cruising around the Hauraki Gulf. After six hours and 151 nautical miles (173 miles/280 km), Chase Zero still had 10% gas in its tanks. The foiling boat had cruised at around 28 knots (32 mph/52 kph), covering much more than what was expected.

According to the team, the same journey completed at 28 knots on a conventional chase boat powered by twin 250 hp outboards would have required a total of 825 liters (218 gallons) of fuel, which is more than what its 800-liter tank can hold. So, a regular chase boat could not complete the journey at the same speed as its hydrogen-powered counterpart without running out of fuel.

Based on these demonstrations, the engineers at ETNZ are estimating that Chase Zero can promise a range of 178.19 nautical miles (205 miles/330 km) at around 28 knots on four full tanks of hydrogen.

ETNZ also acknowledged Toyota for developing the powerful fuel system that allowed Chase Zero to hit these impressive milestones. The 32.8-foot-long (10 meters) foiling boat is equipped with 80 kW Toyota hydrogen fuel cells, one in each hull.

Ready to make waves in racing, Chase Zero is also meant to pave the way for future commercial boats powered by hydrogen. 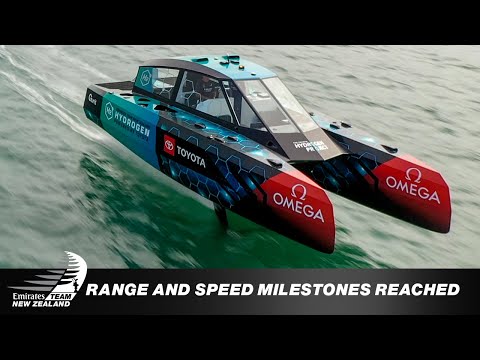