3 New AMG Cigarette Speedboat Is Coming, Inspired by The G-Class

5 Mercedes-Benz SLS AMG Cigarette Boat Up for Grabs for $1M+
Car video reviews:
Up Next

More than a decade ago, Richard Jenkins and his Greenbird set the Wind Powered Land Speed World Record at 126.1 mph (202.9 kph). Now, the Emirates Team New Zealand (ETNZ) is gearing up to break that impressive record. A new vehicle is already being built after months of development, and sailing champion Glenn Ashby is ready to tackle this new challenge.
7 photos

ETNZ is determined to break this world record, but the significance of this achievement will be much bigger than that – the team’s vehicle will basically become the fastest wind-powered land yacht ever made, reaching the highest speed of this type of craft on or off the water. The dream of a World Record attempt has been on the team’s radar for a long time but now seems like the perfect moment to put things into motion.

The craft is currently under construction at ETNZ’s facility on Auckland’s North Shore. After being completed at the end of March, it will be shipped to South Western Australia. That is where testing will begin in July. The potential locations for attempting to break the world record are some of Australia’s famous salt lakes, such as Lake Gairdner in South Australia or Lake Lefroy in Western Australia.

The man who will carry out this massive task is Glenn Ashby, winner of three America’s Cups, an Olympic Silver Medal, and 17 World Championships in various classes of boat. Together with a team of designers, engineers, and shore crew, Ashby has been hard at work trying to come up with a new craft that would be capable of achieving this monumental task.

According to the design team, the process has some similarities with building fast sailboats, but a land yacht comes with its own challenges. According to the rules, the vehicle must run on a flat natural surface, and dry salt lakes are the best solution for that, as areas where there’s also plenty of wind. This is why tires will be one of the most important elements of the new vehicle. A vehicle that is also very different than motorized cars, with a wing instead of a motor.

Early August is when the team plans to take a shot at the World Record. Officials from the North America Land Speed Association will be the ones verifying the attempt. If successful, this new land yacht will become the fastest vehicle of its kind ever built. 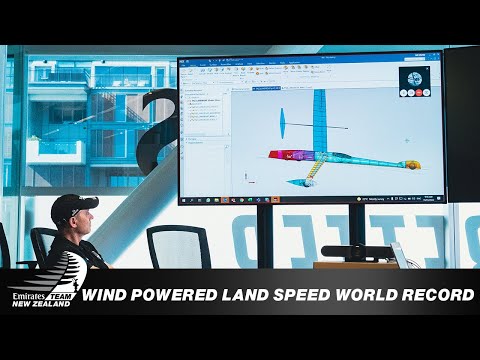