A decade ago, the Emirates Team New Zealand (ETNZ) wrote sail racing history by introducing the first foiling catamaran in America’s Cup. Now, it’s claiming the same pioneering title as it launches a unique hydrogen-powered foiling chase boat that will turn heads in the prestigious competition. Chase Zero successfully completed its first “flight” around the Waitemata harbor in Auckland.
7 photos

The Chase Zero prototype is part of a Hydrogen Project initiated by ETNZ and will be the first of its kind to be part of the America’s Cup. It’s 32.8-foot-long (10 meters) and large enough for six crew members. It’s equipped with 80 kW Toyota hydrogen fuel cells, one in each hull. The gaseous hydrogen passes through a catalyst that separates the electrons, which then power the boat. The electricity either goes directly to the motors or is stored in the battery.

According to the ETNZ engineers, the batteries are essential for hitting higher speeds and for situations where a fast change in power is required. “The response time of the fuel cell is much slower than available from the battery, so during fast changes in demand the battery supplies the difference as a compromise in performance was not an option,” said electrical engineer Michael Rasmussen.

With its futuristic look and zero-emission capabilities, Chase Zero paves the way for similar hydrogen-powered vessels outside the racing world. The goal is not just to turn heads during the competition but to have an impact on the global marine industry. 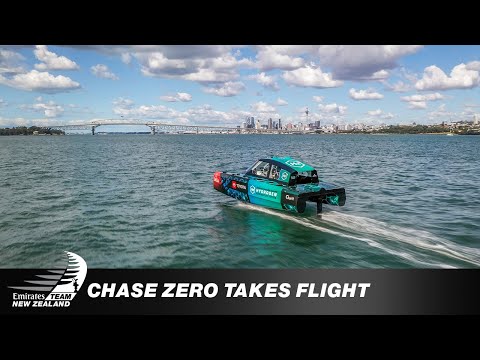