Turkish Auto Industry Rising From The Ashes of the Chip Shortage, Here's How

Otilia Drăgan
The next-generation cargo ship that promises to disrupt the maritime industry comes from France. Energy Observer has used the extensive knowledge and experience acquired with the help of its first revolutionary ship, a zero-emissions floating laboratory, to design an even more exciting vessel. The Energy Observer 2 will be a multi-purpose cargo ship fueled by liquid hydrogen.
6 photos

Back in 2017, the French company was launching an innovative catamaran, the first Energy Observer, that achieved several world-firsts in terms of clean energy technologies. It was the first certified mass-produced boat powered by hydrogen, integrating a complete hydrogen production chain using seawater electrolysis. By now, this laboratory catamaran has sailed 48,000 nautical miles (55,200 miles/89,000 km), performing demonstrations in more than 30 countries.

The next step is to develop a next-generation cargo ship that will blend optimal transportation capabilities with zero-emissions navigation and increased autonomy. Called Energy Observer 2, the vessel will be 120-meter-long (394 feet), boasting a commercial speed of 12 knots (13.8 mph/22.2 kph) and a range of up to 4,000 nautical miles (4,600 miles/7,408 km).

In addition to its electric propulsion and hydrogen fuel cell system, the Energy Observer 2 will also be equipped with a modern sailing system developed by Ayro. The company first tested this auxiliary propulsion system for large ships on the pioneering Energy Observer.

Several major partners are involved in the project, including hydrogen specialist Air Liquide, the naval architecture firm (LGM Marin) that made the world’s first liquid hydrogen ferry, and the maritime logistics expert, the CMA CGM Group.

With this new vessel, the French innovator wants to take hydrogen technology for maritime vehicles even further. It pioneered development in this field with its first catamaran and will now address new challenges, such as the integration of large hydrogen tanks and optimal control of cryogenic temperatures.

The groundbreaking cargo ship concept will be presented at the One Ocean Summit, in the French port of Brest, on February 10. 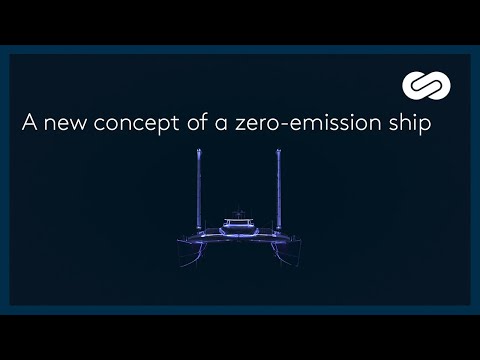