5 2020 BMW X5 M Hunts Down Toyota Supra on Nurburgring, The Chase Is Wild
Up Next

Mihnea Radu
We all love to praise lightweight sports cars with powerful engines and sexy lines. Yet we can't deal with the fact that they aren't perfect.
1 photo
Just days after being released, the new Toyota Supra and BMW Z4 were already being criticized. The biggest problem? The fact that they're related. Somehow, Toyotas was bringing BMW down and vice-versa.

As you're probably aware, these two have quite a lot in common, not just a platform. The GR Supra is powered by the same engine as the Z4 M40i, a BMW inline-6 with a turbo. In America, there's about 40 horsepower between them, though it doesn't apply to all markets, which is probably why this review doesn't mention it.

It's from Japan, and the language barrier stood in our way. But according to this well-spoken fellow, there are some key differences. The Supra is apparently easier to manage on the edge when you want to drift it while the Z4 is less communicative before it breaks traction. Damping is also done differently.

If you ignore the sounds proofing, the two sound almost the same. It's worth noting that both the Supra and Z4 are also available with two more 2-liter engines. As for the interior, it's hard to look past all those German buttons and switches. But considering how bad Toyota navigation is, it's probably for the best.

Toyota will tell you that their interpretation of the sports car is unique, and that's certainly true from the outside. This over-the-top body has received a lot of criticism, but it's not that bad in person. The only issue we have is with the pointless and fake air scoops on the doors. 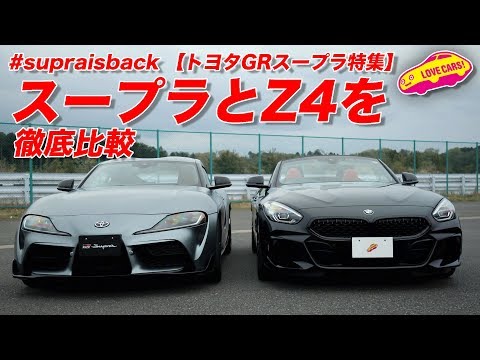