5 Ford F-150 vs. Toyota Tundra vs. Ram TRX: Which One Is The Quickest Tow Truck?
Up Next

Dragos Chitulescu
Ever since BMW has introduced its new front grille across their range of vehicles, people across the world have seemingly lost their minds over it. So much criticism and hate are going on when talking about this grille, but I believe that this has been an excellent marketing move. After all, there's no such thing as bad publicity.
19 photos

I've said it before, and I'll say it again: people will start getting used to that front bumper. Some of them will even grow fond of it, and I can see myself changing my initial opinion little by little as I see more of these cars going down the road.

As for the fact that some will label these cars as "twins," I don't care much about that either. Carmakers have been doing this for years, and I guess the vast majority of people complaining about the current situation haven't even driven the Supra before expressing their thoughts.

So I was interested to see how the M440i would fare against the GR Supra. They both use the same powerplant, which provides the same amount of torque to both drivers—368 lb-ft (500 Nm). The Supra used for this challenge only has 335 horsepower, while the BMW has the upper hand, with 382 horsepower. Both cars feature 8-speed automatic gearboxes, but the Supra comes with RWD while the BMW has an AWD system.

With the Supra being slightly lighter than the M440i, at 3,295 lbs (1,495 kg) versus 3,836 lbs (1,740 kg), you would tend to think that this is pretty evenly matched. But with the track looking somewhat damp, it may ultimately be a question of which car can make use of its full potential. The exhaust note test before the first run reveals similar results, although it does feel like the Supra is a bit more aggressive.

As the first run starts, the BMW is already ahead of the game. Fanboys will be fairly disappointed seeing the Supra left behind, and I must say that I did expect this to be slightly more balanced. The result leaves you with the impression that the Supra packed the 2.0-liter engine, but that's not the case.

The two drivers go at it one more time, and the result is unchanged, as the BMW crosses the finish line in 1st place. The third time's the charm, and the Supra is slightly less behind this time. The M440i did the standing quarter-mile (402 meters) in 12.1 seconds, while the Supra managed to do it in 12.5 seconds. Mat's last resort is a rolling race, but the first run doesn't go as he thought it would.

He tries mixing things up for the second run, as they start from 50 mph (80 kph), with the Toyota now in its Sport setting and Manual mode for the gearbox. We're looking at a 3rd gear pull, and this is the first time they're neck and neck as they go all the way up to 135 mph (217 km/h). It's hard to tell who won, but after the Supra comes in second once again after a 70 mph (112 km/h) to zero brake test, it does seem like, for the day, the BMW M440i is the faster car out of the two. 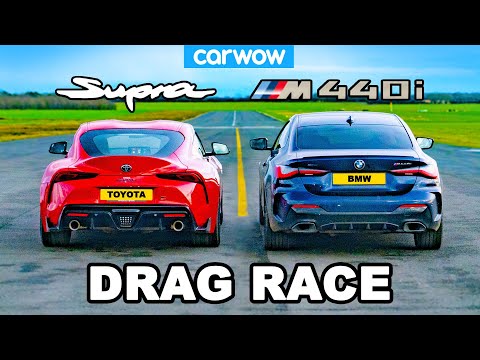