Canadian EV manufacturer ElectraMeccanica keeps working on its plan to make urban transportation more sustainable and convenient. Thanks to a newly signed partnership with Faction Technology, a Silicon Valley startup, its popular, three-wheeled Solo EV will be tested for autonomous food delivery.
6 photos

The Solo EV was revealed roughly seven years ago, as a one-seater made for city commutes. It is tiny for a good reason: most city cars transport a single person, which is a waste of space and materials, not to mention that we only contribute to congesting the traffic this way.

ElectraMeccanica designed the three-wheeler to be light, to have some cargo space and a decent range, making it suitable for shared mobility and delivery services. And that’s exactly what it plans to test it for in the near future, via its collaboration with Faction Technology.

Faction specializes in autonomous driving AI supported by teleoperation, powered by its patent-pending DriveLink platform. The two companies have now teamed up to launch a Solo EV pilot program, testing the three-wheeler with Faction’s driverless and remote operation technology for applications such as food deliveries and ride-on-demand services.

Over the next 12 months, a fleet of up to 24 Solo EVs will take part in the pilot. Three units have already been delivered to Faction.

As specified by Kevin Pavlov, CEO of ElectraMeccanica, Faction was one of the first customers to receive a Solo EV for its development fleet. This new agreement is the next step in their collaboration, meant to promote a new type of urban micro delivery, one that is driverless and more sustainable.

ElectraMeccanica’s three-wheeler is legally classified as an autocycle and also has access to carpool lanes. As its name suggests, it only has room for the driver, as well as some luggage space in the back. It packs a 56HP electric motor, being able to reach a top speed of 80 mph (129 kph) and it’s powered by a 17.4 kWh battery pack, claiming to offer a range of up to 100 miles (161 km) on a charge.

The three-wheeled EV is priced at $18,500. The first units were delivered to customers back in October. 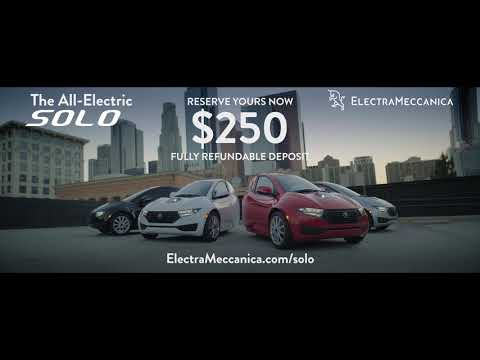