3 UFO Hovering Over Stadium Stops Traffic in New Jersey, Turns Out to Be a Blimp

No folks, it’s not the 1930s again. And no, the Hindenburg will not be seen soaring through our skies. Well, sort of. But in fact, we very well could see its little brother.

What we are talking about here is an all new aircraft based on a fairly old design, the dirigible. The dirigible in question here is this floating butterfly called the Dirisolar DS1500 by, you guessed it, Dirisolar.

Even though we are living in the year 2020, this is a design that is now starting to see some upgrades. Aside from the usual flight over a stadium running and add on the side, or the Hindenburg incident in ‘37, we haven't heard much of this airship design. But they have been running in the background in some parts of the world, offering tours or short distance transportation. Again, on a very insignificant level.

Until now, that is. A team of investors, engineers, accountants, and designers have put their brains together to bring new life to a nearly forgotten vehicle. To start, the use of hydrogen has been replaced with the more stable helium. Even though helium is nearly twice as heavy as hydrogen, it’s still lighter than the overall composition of air, so it still floats. This is the same stuff as in your party balloons.

The construction of the DS1500 does differ from other designs in that the bottom is flat. This sort of design has a number of functional outcomes. The first of which is the DS1500's ability to dock lower to the ground than standard blimps or dirigibles. Another benefit of this is aerodynamics. This shape is similar to the same one found on an airplane or bird wing if we were to dissect it. But why is such a shape important? It naturally offers lift.

The benefit of this is less engine strain, less gas is needed, and a greater payload can also be carried due to this lift. Speaking of payload, there is only one purpose for the ship, and that’s tourism. That’s also the reason why the only space available for guests if the viewing room at the front. It’s also the same and only room available for the pilot as well. But don’t worry, they’ll mind their own business.

It’s here that you’ll spend your entire 30 or so minutes floating around the Taj Mahal, Serengeti, or wherever these things end up taking off. This cockpit only allows space for five people and includes a full 180-degree view of your surroundings. My only opinion on this feature is the lack of visibility toward the ground. I feel a glass floor would have done this design wonders.

Now, because we are in the 21st century and emissions are a problem, this aircraft has been designed to run completely on the most abundant source of all, the sun. Yup, it’s solar powered. At the rear of the DS we can find two horizontal fins that are covered in photovoltaic panels. It’s from here the motors get just enough power to maneuver this balloon around, after all, not much more than this is required of a dirigible’s motor.

How strong these motors or engines are, or how much power the panels convert is not specified. So this is really all we have.

But personally, if this project does take off, and it looks like it has, then we could very well be seeing more and more of this once forgotten design around our skies. Imagine checking out the Grand Canyon or Niagara Falls in this silent eco-friendly airship. Yeah, I think I'll join you on that trip. Oh, and I nearly forgot, this isn't just some made up concept, this project has even been funded through IndieGoGo at one point. 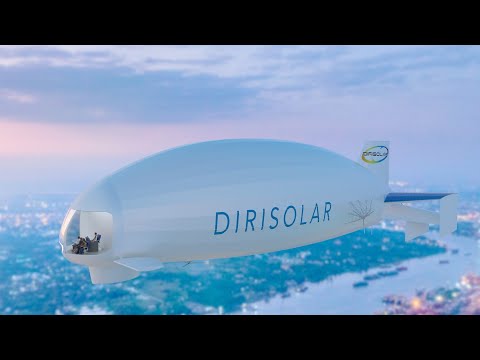