1968 Chevrolet Yenko Camaro RS/SS Kept Out of Sight for 42 Years, Packs All the Goodies

It is very likely that electric vehicles will play an increasingly important role in the future of public transportation. We expect to see a major focus on the development of electric and autonomous vehicles for this sector, as companies are more and more concerned with reducing operating costs, increasing efficiency, and minimizing the environmental footprint.

These Driverless Transparent Pods Could Be the Future of Public Transportation

For Marko Petrovic, graphic designer and founder of MarkDesignStudio, the solution for a sustainable and appealing public transportation system is as straightforward as it can be - make public utilities look and feel as luxurious as personal private cars.

For this year’s edition of the Movin’On Challenge Design, a global competition organized by Michelin that aims to promote sustainable mobility solutions, Petrovic has designed a futuristic-looking driverless transport pod that runs on clean energy called Concept NTU, which stands for NewTransportationUtility.

Built on an electric platform powered by solar energy, the Concept NTU is designed as a transparent pod able to carry six people from point A to point B. The pod would travel on fixed routes, just like the tram or railway systems of today.

In terms of structure, the pod is comprised of three separate parts – the frame, which houses the entire transparent cabin within it, a sturdy polycarbonate cabin, and the engine arms. “The main inspiration and idea is recycling plastic waste and combining it with reinforced nanotech and carbon fiber creating a strong and lightwave chassis for future models,” Petrovic has said.

As you can see in the photos, though the pod looks like a car, it doesn’t have actual wheels. Instead, the designer envisioned the pod with “smart” wheels that are, in fact, computer units. “Inside the arms/pillars is also located a powerful computer with an electric engine and caterpillar system instead of the classic circular tire,” Petrovic explains.

Instead of lithium-ion batteries, as you’d expect from an electric vehicle, the Concept NTU leverages Tesla’s wireless energy transmission systems. The engine pillars wirelessly charge from nearby electric power stations, and according to Petrovic, nothing goes to waste, as the non-used energy is shared with other power stations or NTU electric vehicles it encounters on its way, thus creating an efficient distributed wireless energy network.

The polycarbonate cabin is a separate entity that can slide outside of the frame and await passengers at designated locations across the city. When an empty NTU frame comes along, it docks into it and travels to the next station. The car frame acts as a rolling cage that protects the passengers inside.

Transparent displays are laser-integrated into the polycarbonate cabin and are controlled by a central computer unit inside the glass. These serve as the user interface for the in-car passengers and can also be used to produce visuals on the outdoor front side.

Since the theme for this year’s Movin’On Challenge Design is “Balancing Sustainability,” the designer focused on the three known pillars of sustainability when creating his entry, namely People, Profit, and Planet.

Petrovic believes that people would be more inclined to use public transport if it offered the same comfort as their luxurious private vehicles and wore the badge of popular brands like BMW, Audi, or Mercedes-Benz. In his view, the people and the planet would benefit from the implementation of Concept NTU in public transport systems through the combination of sustainable design and efficient public utility service that would move people around in comfort and style.

As for the Profit factor, Petrovic envisioned these transportation pods as being produced directly by car manufacturers like the ones mentioned above, with a focus on public service. Brands would be able to capitalize on this project by further expanding their offerings with personalization packages for the pod’s UI and UX.

The automotive future is electric, there is no question about that. However, when it comes to public transportation, there are some challenges that need to be addressed in order to fully realize the benefits of electrification in this sector. Some of these challenges include high upfront costs, limited driving range, and the need for a well-developed charging infrastructure.

Despite this, many cities and countries are actively investing in electric buses and trains, so maybe in the not-so-distant future, designs like the one envisioned by Marko Petrovic for the Moving’On Challenge competition will become feasible.

The deadline for submitting your application for this year’s Moving’On Challenge Design is February 28, 2023. An international jury panel will assess all entries, and the winners will be announced at the Movin’On Summit in June 2023. 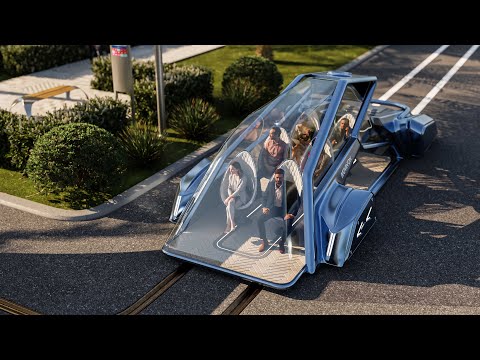 What Is the Fastest Tesla in 2023See all coverstories