It looks like some sort of a mysterious hybrid ship, but it’s a tidal turbine. And, while that may not sound that exciting, it actually is. This powerful device is one of the best alternatives for a sustainable future, which uses tidal energy to generate electricity.
6 photos

Scottish company Orbital Marine announced the completion of their floating tidal turbine technology. The prototype of the O2 was created back in 2017, as an innovative alternative to big, expensive tidal energy power plants. Now, this floating turbine is ready to unleash its full force.

O2 is a floating platform that can be placed and secured by anchors in powerful tidal streams, in order to use the movement of the water for generating electricity. The underwater rotors capture the kinetic energy and transform it into 2 MW of power.

The moon’s gravitational pull creates tides and the kinetic energy of the water can then be used to generate power. Although today there are several tidal energy plants around the world, with a huge capacity, they are all based on barrages that are not only costly, but also not too good for the marine environment.

Unlike them, Orbital Marine’s turbine is much more affordable, it doesn’t have a negative impact on the surroundings and it’s also easy to operate, thanks to its giant legs that help it stay underwater or lift it to water surface, for maintenance.

According to the Scottish company, global tidal energy has the potential of generating 100 GW, which would be enough to power 80 million homes. Compared to that, the O2 tidal turbine alone is capable of producing enough power for 2,000 homes in the UK. Plus, it can be scaled down to be used in rivers and provide power not only for households, but even for EV charging points.

The O2 tidal turbine is currently being used in Orkney, Scotland, where it provides cleanly sourced electricity for the local community. 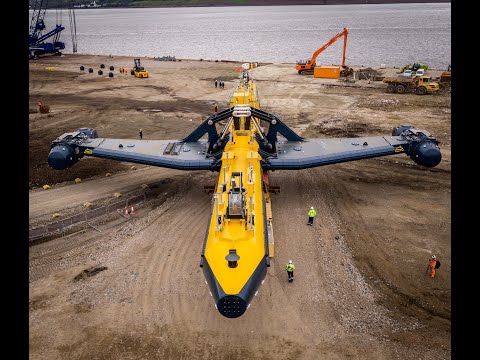