The US Presidency Frees $4.5 Billion in Loan Guarantees for EV Charging Points

The Terminator T-1000 Is Real, and He's Been Spotted in Ukraine

If you haven't watched the first two movies in the Terminator series, we suggest you drop anything you're doing right now and go do that. How else would you be able to appreciate a well delivered "I'll be back" line?
5 photos

They are two of the most iconic sci-fi doomsday apocalyptic films ever made, and above all, they've got robots. And Arnold Schwarzenegger. They also had great special effects for that time, even though you'll probably laugh now at the obvious sight of the poorly made dummies, but back in 1984, that was the best Hollywood had to offer.

It was also one of the first movies that brought forward the idea of artificial intelligence taking over one day and the obvious risks that come with it. Once you have machines autonomously building machines and they become self-aware, what's there to keep them from (rightly) deciding they don't need the fleshy humans anymore? Well, add a bit of time traveling into the mix and you've got yourself the perfect scenario for a sci-fi action movie.

That may have absolutely nothing to do with what goes on in this video - vodka, on the other hand, probably does - but the similarities to a scene from the second movie are striking. If somebody told us that John Connor was on that bus and that this guy had just arrived butt-naked from the future, stole some clothes and grabbed onto it with his claw-like hands, we wouldn't have such a hard time imagining. Of course, the Terminator theme song playing in the background helps too.

Well, if that all were true, then the guy in the van was there to protect the future resistance leader. How else could you explain his behavior? I mean, he had all the time and the space to stop before running him over. He brakes a little at first, and then seems to go "oh, screw it, he was hanging from the back of a bus, it's not like being run over by a van will kill him or anything." 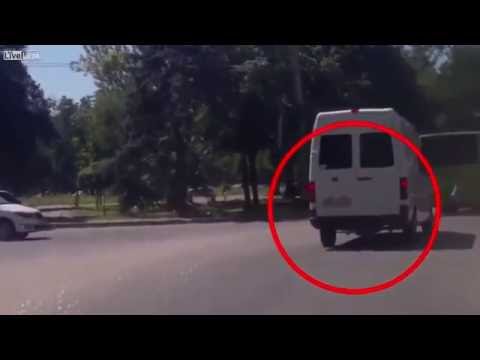