2 This Is What a Trunk Full of Rabbits Looks Like

4 Villains Beware: The Pit-BUL is Here to Disable Your Car

Say what you will but we here at autoevolution are fans of the Terminator franchise. Ok, maybe not the last two movies but the original and the second one were pretty good, to say the least. Schwarzenegger sure can make for a mean robot!
2 photos

What surprised us in the second movie was how resourceful the T-1000 model was when it came to overcoming obstacles in his way. That’s basically what also impressed us when watching the video posted below.

In it we get to see a cop car chasing some sort of SUV that we can’t really make out because of the poor resolution of the dash camera. However, at one one point, the chase goes off road and, seeing as the speed has gone down to acceptable limits, one of the cops jumps out and starts chasing the suspect on foot.

What’s amazing about his feat is that he is able to catch up and even hop in the car to catch the perpetrator. And just like in the movies, the suspect gets out through the other side of the SUV and starts running the other way. It’s all quite funny and it could also be fake but we simply had to share it with you guys. Did you also get a flashback from the Terminator sequel or are we just going crazy? 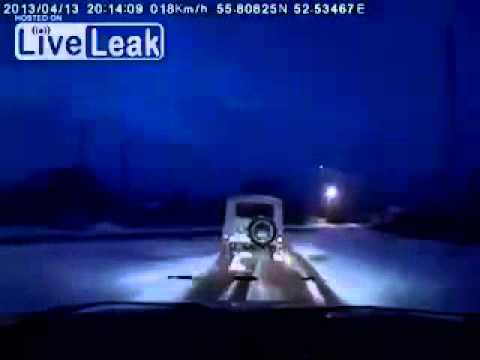