Among the many things we’ve learned these past couple of years is being open to alternative urban mobility solutions. People who never rode a bike before are now avid e-bike enthusiasts, or often use e-scooter ride-share services, or own other types of electric two- and three-wheelers.

The ENGWE X26 e-Bike Is Big, Bold and Beastly, With Triple Suspension and 1000W Motor

Urban mobility is ever-changing, and e-bikes continue to do well in sales across most international markets. But for those potential customers who are torn between deciding which model or frame best suits their needs, China-based maker ENGWE has an answer: why choose between various models, when you could get an e-bike that does it all?

The ENGWE X26 is the latest addition to the maker’s lineup, and looking at it and its specs, it wouldn’t be too far-fetched to imagine the dialog during brainstorming went something along the lines of, “how badass do you want your bike to be?” “YES,” like in that popular meme. The X26 is everything thrown in together, in a package that seemingly works both in terms of design and functionality.

This e-bike wants to be an ever-competent and multi-purpose beast, equally comfortable on city streets and off-road, with great range, plenty of power and maximum comfort. It’s big, can carry an extra passenger in the back, promises the smoothest ride wherever you might want to take it, and looks badass, if you’re into this kind of bulky styling.

On paper, the only downside to the X26 is that it’s not immediately available (then again, there are few e-bikes you can get today that ship right away) and that it’s offered on a crowdfunding site. Those who’ve been burned before have good reason to be cautious with how they pledge their money, but on the other hand, ENGWE is not at its first campaign.

The X26 premiered on IndieGoGo earlier this month and, as of the time of press, has already surpassed its funding goal. Shipping for early-bird pledgers, who can get it at a discounted price of $1,600, is scheduled for August 2022 for the U.S., the UK and the EU.

The first thing that stands out about the e-bike is how massive it looks. It stands on “motorcycle-grade” 26” 4-inch-thick all-terrain tires, which provide a smooth ride even on rough terrain, but it’s the triple suspension that does most of the work in this sense. You get a hydraulic fork in the front, air suspension in the rear, and a mechanical shock in the middle of the frame, so whatever you have in mind for the X26, it’s more than up for the task.

Power comes from a rear-hub motor that peaks at 1,000 W and is rated for 750 W continuous power. Top speed is 50 kph / 31 mph, and range is a solid 100 km / 62 Miles in Normal mode (there are three riding modes available: Sport, Normal and Assist). ENGWE is able to offer this kind of range with dual batteries – a 48V 19AH main battery that is not removable and is stowed away under the seat, and a smaller 9.6AH secondary battery that slides out of the top tube.

The list of specs includes the ability to climb 30% inclines, hydraulic disk brakes, Shimano 8-speed gearbox, Polychrome LCD dashboard for vital stats, and a maximum payload of 330 pounds (150 kg). The bike itself weighs 90 pounds (41 kg), which puts it on the heavy side even for e-bikes, which are notoriously heavy, but as the saying goes, something’s gotta give.

You can’t pack all these features into a single product and keep it lightweight and on a budget. If there’s any consolation, the X26 can fold down to half its size, and the company says that it can fit into a car trunk when like this, despite the massive tires.

Even with the boom in e-bikes and the more varied list of options it led to, the X26 stands out. It positions itself as a heavy-duty machine, the kind of bike that does it all, whatever that might be – and does it while looking good and keeping the rider comfortable. With early bird pricing, it’s also an affordable alternative for urban mobility, but ultimately, whether it’s worth backing it is entirely up to you. 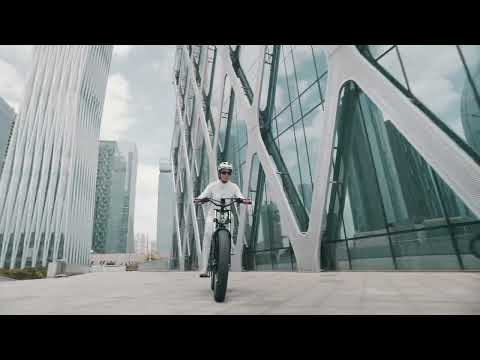 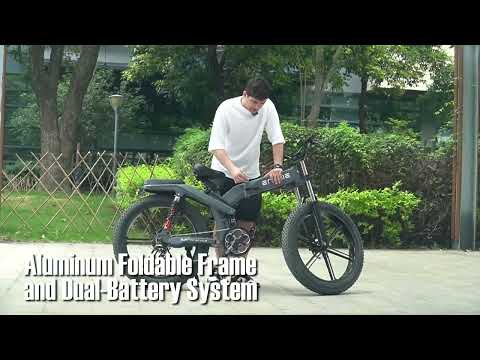