You don’t have to be a pessimist to acknowledge that things are bad right now all over the world, across a variety of sectors. But maybe a little project could help you pass the time having fun and save you some money in the long run.
17 photos

A single glance at the headlines is enough to bring you down. We have international conflicts, we have extreme weather and tragic events because of it, we have toxicity and hatred, pollution, shortages of all kinds, and spiking gas prices. The HMV FreeWay will do nothing in terms of solving any of these serious issues, but it could help you save some money on gas. The only condition is that you be willing to invest some time to fix it up and not be too hung-up about your safety in traffic.

The HMV FreeWay is what you might call a classic: a trike that was introduced in 1979 during the oil crisis, developed by Minnesota-based Dave Edmonson as a means to counter it. It is a single-person vehicle that was offered in two engine capacities and an electric variant, and neither model was in any way remarkable in terms of speed or comfort. Or safety.

Still, 700 units of the HMV FreeWay were produced, and one just happens to have emerged for sale on Bring a Trailer. It’s a project vehicle and, despite its name (HMV stood for “high-mileage vehicle”), only has 592 miles (953 km) on the odo. Generously described by the seller as an “automobile,” the trike comes with the electric drivetrain removed, as the original owner aimed to restore it but never got around to it. As such, it presents the opportunity of replacing the old one with a modern one.

That and the appeal of a vintage, limited-run vehicle make up to the entire appeal of the trike. It’s a most basic vehicle – so basic that the listed equipment includes windows, steering wheel, and bumpers. Irony aside, the FreeWay was designed as something that would get you from point A to B at a speed faster than walking, with smaller costs than a car. And it looks the part. The rear side windows pop up, the rear window opens like a hatch, there is a single door for access, a single seat, a single headlight, and room for three grocery bags (four, tops). The dash includes the odo and two direct current amperage gauges.

On the bright side, the FreeWay has three-wheel independent suspension and shows no damage to the fiberglass body. The original motors are included in the sale, as are photos and factory literature.

Just as appealing as the fact that this could get you to work with no expense for you at the gas station, is that bidding is very low. As of the time of press, despite considerable interest, the HMV FreeWay sits at $100 with four more days to go into the auction. 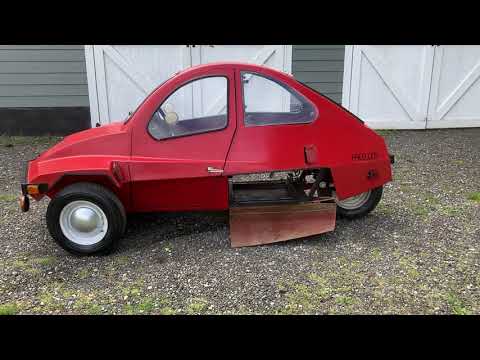