1 World’s Stupidest Police Chase Is Totally Something Else

3 Passenger Takes Horse on a Train in Austria, is Forced Off

4 Driver Plows Into Horse and Rider in Very British Accident

During the Monday evening rush hour traffic, a horse and a rider showed up on the Dan Ryan Expressway in Chicago. They were accompanied by a 10-motorcycle convoy that made sure to block all lanes to keep them safe, before two police patrols showed up to escort them off.

It was a tense, albeit very slow-speed chase, the very first of the kind: a horse chase on national television, on an expressway with traffic backed up for miles because a horse should never be on it. You can see it full in the ABC 7 Chicago video report below.

The chase lasted for almost 30 minutes and covered more than 7 miles (11.2 km), with the horse going at speeds of up to 17 mph (27.3 kph) and the rider waving and yelling at curious bystanders. It ended with the horse limping and bleeding at the hooves, because riding on asphalt is not exactly the smartest idea.

Neither is not shoeing it before such a ride, which is apparently what the rider did. Identified as Adam Hollingsworth, aka Dreadhead Cowboy or Census Cowboy, the man is actually a well-known figure in Chicago’s activist circles. He is an urban cowboy fronting the campaign Kids Lives Matter, which aims to raise awareness and funds to deal with the issue of children becoming collaterals in shootings.

This stunt was part of that campaign. The plan was to take the horse to the highway and, with help from the motorcycle convoy, stop traffic so as to deliver the message home: children’s lives matter.

Hollingsworth was arrested and is now facing charges of obstructing traffic, reckless conduct, disobeying a police officer and trespassing on a highway, and operating a non-highway vehicle (?) on the highway. He’s been charged with aggravated animal cruelty and had had his horse taken away: according to the police, the horse suffered injuries and was bleeding from the hooves, and had a bleeding saddle sore on the ride side.

On social media, Hollingsworth is saying he’s being framed by the police for merely using his voice to bring awareness to the cause. He claims the horse was injured when one of the police cruisers hit it, in an attempt to get him across to the shoulder, so he would dismount.

Regardless of that, a horse should never be on a highway: it is dangerous and illegal. Using whatever platform you have to do whatever you believe is right is admirable, but don’t put yourself and others at risk by riding a horse on the expressway. 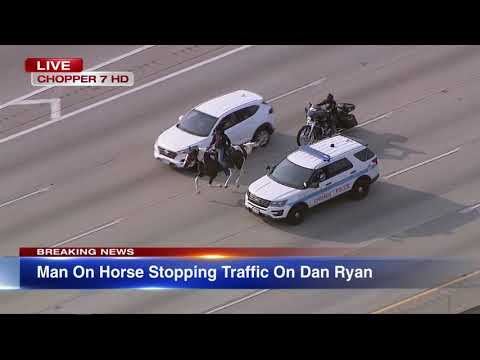