Say what you will about their prices or their design skills, but Porsche are among the best engineering companies on earth. Right now, their two hottest models are the 911 Turbo S and the Taycan Turbo S. But there's only one crown, and a drag race might settle who it belongs to.
6 photos

Many people think the Taycan was designed to take on the Tesla Model S. It's got roughly the same shape, four doors, and runs on electricity. But it's actually more of a science experiment for rich people to sponsor.

The handling and performance are supposed to be much closer to those of a traditional Porsche. You wouldn't want to put this in autopilot mode and have a nap because it's so bewitchingly fun. It's also super-fast, and most drag races have indicated the difference between it and a Tesla is minimal at best in a straight line.

One thing the Taycan lacks is a real Porsche motor. While it says Turbo S on the back, no turbos are used here, unline the 911 Turbo S. So does that negatively impact performance?

As far as the specs are concerned, the new 911 Turbo S has 640 horsepower and 590 lb-ft of torque, improvements of 60 horses and 37 lb-ft over the outgoing model. This comes courtesy of a new flat-six engine running 22.5 psi of boost and some of the coolest internals ever. Too bad you can't see anything when the hood is "open."

The Taycan Turbo S can boost its performance from 616 horsepower to 750 hp, while twist measures 774 lb-ft of torque. Overboost is only available for short bursts, which a drag race is.

So, more power, more torque, and the magic of instant EV power deliver. The Taycan has this in the bad. However, we've never seen a 911 Turbo S lose that many drag races. This should be interesting! 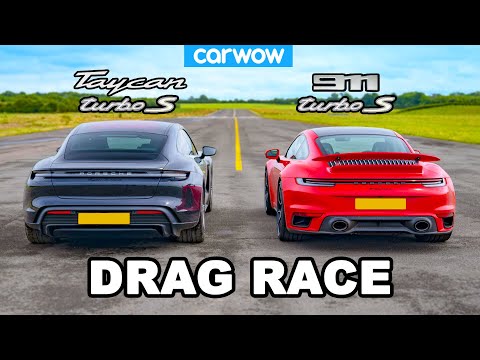