Most affluent customers and - above all - VIPs and other stars are currently trying to flaunt the latest Maybach or Rolls-Royce build. However, some people will seek to valiantly stand out in any crowd.
7 photos

Not long now and the modern interpretation of the original 1938-1939 Rolls-Royce Wraith is also going to bite the dust everywhere around the world. Currently, North American aftermarket outlets are depleting their customization “inventories” of contemporary full-size suicide-door grand tourers. So, let us take the good folks over at Hollywood, California-based RDB LA for a big style example.

Recently, they shared on their social media reel the news that their “last of the great Rolls-Royce Wraith” has been finished up. This Black Badge example sure looks menacing, exactly as per the description, and is just one of many builds they have been working on lately. For sure, though, it is not going to be a “daily basis Wraith” atmosphere in the shop from now on, as it was at one time in the near past.

But for more insights on vlog shenanigans, there is also the YT video embedded below. Right now, let us just focus on the Wraith Black Badge at hand, which – for the uninitiated – might even seem like an example that gladly adhered to America’s murdered-out precepts. However, as it turns out, the matte black paint areas came like this from the factory to better contrast the serious, crimson-and-black interior.

Alas, that is not all, as the Rolls-Royce will stand out in any all-black crowd thanks to a couple of details. First, it was not allowed to remain matte black all over the place, so there are also numerous glossy black areas on the body. Plus, while the lowered presence and the custom all-black RDB LA wheels match the dark atmosphere, a few subtle red lines divide both the coach lines and represent the matte/glossy black threshold. 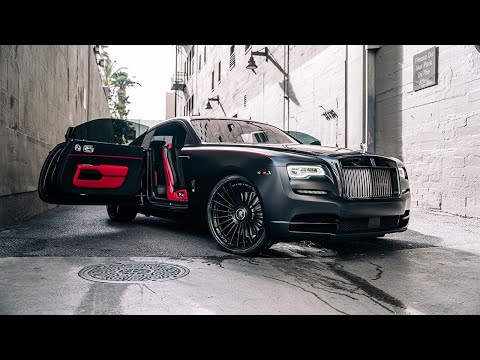