But to say about a Rolls-Royce that is a luxury vehicle, it is an understatement.

The Rolls-Royce has revealed the Wraith at the 2013 Geneva Motor Show. It was, right from the start, the center of attention for the whole event. It was the Queen of the Show. The huge vehicle featured a sloped cabin with a very long roof. But that fastback-shape has nothing to do with fast but it had everything to do with the image. On the front, the high, almost vertical, front fascia featured the well-known silver grille and, on top of it, there was the retractable Spirit of Extasy silver statue that can be risen or lowered via a designated button on the key-fob.

Inside, the luxury was over everything else on the market. The wooden panels were hiding the infotainment system that was taken from the BMW 7-Series. The whole vehicle is based upon a 7-Series platform, but with only two, rear-hinged, huge doors. These doors can be closed at the touch of
a button. The instrument cluster featured three large dials and the most interesting one is the "Power Reserve" one. In Rolls-Royce, there are no tachometers. There is just a dial that shows how much power reserve the engine has. And has plenty of it.

For the suspension, the Wraith had a firmness setting, but as usual, a Rolls-Royce cannot be sporty. Just fast, smooth and luxurious and comfortable. 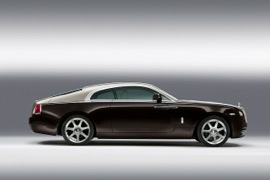 2 Rolls-Royce Luxury GT Feels the Photo-Editing Wra(i)th, Gets Turned Into a Hot Rod

4 A. J. Bouye’s Latest Achievement Is a Black Badge and Yellow Bespoke Cullinan on 26s