A few years back, when Lewis Hamilton was just warming up to the idea of completely dominating the sport of Formula 1 for a good half decade or so, the now seven-time champion entered into a partnership with MV Agusta, resulting in the creation of a limited-edition bike.
29 photos

Dubbed the MV Agusta Dragster 800RR LH44, or Lewis Hamilton Edition, this thing looked wicked hot from the start. Also, they only made 244 units, meaning it was rare – not “ultra-rare”, but rare enough to brag to your friends about.

Anyway, we just found chassis no. 104 of 244 on Bring a Trailer, where it’s getting auctioned off with just 5 miles on its 798 cc DOHC three-cylinder unit.

Visually, the bike features a combination of white with black and red accents, to go with the Lewis Hamilton-inspired graphics. Other highlights include the aluminum side plates, integrated taillight, frame-mounted turn signals, red 17-inch wheels with Pirelli Diablo Rosso II tires, and a two-up seat trimmed in quilted Alcantara with red contrast stitching.

There’s also a plaque on the carbon fiber wind deflector, which identifies this as #104/244. It also boasts Lewis Hamilton’s race number (44), plus his signature.

Performance-wise, we must mention the adjustable red-anodized 43 mm Marzocchi inverted fork, the adjustable Sachs monoshock, and the dual floating 320 mm discs with Brembo calipers out front. You should have plenty of stopping power in this thing, and you get traction control and ABS as standard, mind you.

As for that 798-cc triple, it comes with a ride-by-wire throttle, selectable fuel mapping, a three-outlet exhaust system and a factory rated output of 140 hp and 63 lb-ft (85 Nm) of torque. It’s not the fastest bike in the world, but rest assured that it still gets the job done when it comes to open-road enjoyment. It's an awesome bike, simple as that. 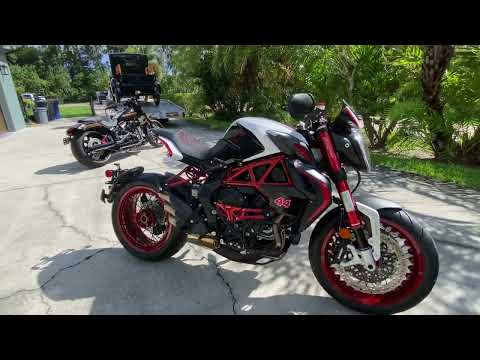