Formula 1 has landed in Hungary for the 13th race of the season, set to unfold near the capital city of Budapest at the Hungaroring. Tension is at an all-time high, as six drivers still have a strong chance of winning the championship by the end of the year. Once again, 20 of the fastest pilots in the world will go through three days of intense action, with millions watching all around the world.

Round 13 of the 2022 F1 Season Starts Today, Drivers Are All Set to Go at the Hungaroring

The Hungarian Grand Prix was introduced on the Formula 1 calendar back in 1986. Nelson Piquet won that first race, driving for Williams Honda. And he would get the same result in 1987, before being dethroned by Ayrton Senna in 1988.

There have been 36 Hungarian GPs so far, and Lewis Hamilton holds the record for most wins here: 8. Not even Michael Schumacher has come close to that number, as he only won four races in Eastern Europe throughout his career. Ayrton Senna is third overall on that list with three victories, while six drivers are tied with two each.

If Sebastian Vettel would win this weekend's race, he would be tied with Senna in third. Seeing that he will be retiring at the end of the season, this would also be a nice way to say farewell to the world of Formula 1.

Looking at the constructor rankings, McLaren is on top of the list with no fewer than 11 wins: the first one came in 1988 and the last one in 2012. Williams and Ferrari are tied in second place with seven victories each, but there's a good chance that Leclerc or Sainz might change that fact.

Over the past four years, Hamilton won the first three races at the Hungaroring. But Esteban Ocon put a stop to that string of victories in 2021 when he secured his first-ever F1 win. In both 2019 and 2020, Max Verstappen was inches away from the top spot on the podium.

But he still was not fast enough to overtake the Mercedes superstar. In 2021, the start of the race was pretty hectic with a major incident just before turn 1. Sebastian Vettel was also disqualified as the required one-liter sample of fuel could not be extracted from his vehicle after the race.

That means only 13 drivers finished the race, with Antonio Giovinazzi being the last one to cross the finish line. Looking at the layout of the track, one lap is 2.72 miles (4.381 km) long. There are 14 turns in total, with six left-handers and eight right-handers. The current race lap record was set by Lewis Hamilton in 2020: 1:16.627.

But both he and Bottas had dipped into the one-minute and 13 seconds lap time before, in qualifying. Looking at the overall standings Max Verstappen is still in the lead with 233 points. All six drivers from Ferrari, Red Bull, and Mercedes are within about 100 points of each other, while Lando Norris is down in seventh place with 70 points.

If Leclerc is serious about scoring his first F1 World Championship title, he needs all the support he can get from his team plus maximum focus to avoid any mistakes. Looking over at the Constructor Standings, it's obvious that the same three teams are fighting for victory this year. At this point, it's hard to believe that either Alpine Renault or McLaren Mercedes still have a chance at finishing third overall.

As always, drivers will be going through two practice sessions on the first day of the weekend. For tomorrow, they're moving on to FP3 and qualifying, which should be quite challenging considering the weather forecast.

Then, on Sunday we're on with the main event: a 70-lap race that will have them driving for 190.53 miles (306.63 km) for a chance to be on the podium. We will report back with more results as the event unfolds! Until then, here's a virtual lap of the F1 circuit so you can get familiarized with the layout. 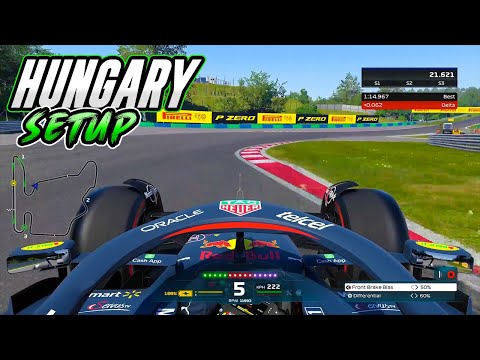