3 Lectric Rolls Out a New Battery for Its XP Folding E-Bikes, Increases Range by 45 Percent

Let's face it, not all things are created equal, and this idea also applies to e-bikes, an industry I've been exploring for the past few years. That said, I discovered a hidden gem over in Germany over a year and a half ago, Urwahn Bikes, and finally, after waiting for nearly the same amount of time, we got our hands on their work, the Platzhirsch, and tested it until I blew out my knee.
45 photos

Ladies and gentlemen, I present to you a piece of German engineering dubbed the Platzhirsch. If it sounds familiar to you, it's because I've written about this bike before. However, this time, I'm writing about it from the perspective of someone who has ridden it, and now that I have, I feel obligated, no, responsible for bringing you all the news about that experience.

Let me start off by telling you a bit about Urwahn Bikes. This dream out of Germany has been in the works for quite some time now, but it wasn't until 2019 that we started to see the very first "Fair Frame" bikes hitting the consumer market. Shortly after, I stumbled upon Urwahn and fell in love with how each frame is designed, manufactured, and shaped.

Sure, this isn't the first bicycle with a frame design that's missing a seat tube, but it could very well be one of the first you even hear of that is 3D printed. Yes, the frame you see is completed using Selective Laser Melting (SLM) to create separate components, layer by layer, from eco-friendly and recyclable steel. Each is then milled, sanded, welded by hand, and as if by magic, the result is what we see.

However, seeing only goes so far, and with my visual cortex stimulated beyond belief, I reached out to Urwahn in the hopes that I may get to test ride one of these buggers. Well, after nearly a year and a half of waiting, my prayers were finally answered with an e-mail saying that the Platzhirsch e-bike had been shipped out to my location.

Upon receiving this bugger, all I had to do was carry the 19-kilogram package up two flights of stairs, and like a kid during Christmas, I ripped all the tape off the box and flipped open the flaps. There it was, like a black diamond against the tan tones of cardboard, looking back at me, just waiting to have its handlebars and stem straightened, pedals added, and ready to ride.

But, I curbed my enthusiasm for a while and explored all the little things this EV has to offer, and trust me, for a cool €4,700 ($4,800 at current exchange rates), there's a lot to explore. All of it started with tightening the bolts and screws to the proper tension and studying how the whole Mahle ebikemotion system functions. With knowledge absorbed, I knew what was to be done; ride the hell out of this bugger for the next couple of weeks, and ride I did, to the point where I blew out my knee. Yes, it was a rather painful photoshoot, as you can see, but the fun simply outweighs the pain.

Folks, if there's one thing I can say about this urban machine is that it feels like one of the best blends between electric and human power that I've experienced in a very long time. It's damn near perfect, and I'm well aware that those are big words, especially since everyone's perception of perfection is different, but, yeah, it's a nice one indeed.

For example, one thing that blew me away was that even though this EV features no suspension, the ride is incredibly smooth, and power is transferred into the rear wheel exceptionally well. Even if motor assistance is off, just a few strokes of the pedal, and you're almost at full speed. All that is because of how the rear triangle of the Platzhirsch is shaped. I wasn't part of the engineering team to be able to explain how it works precisely, but the effect is still the same; a strong push and plush ride.

Now, I also mentioned that this machine creates a very thin line between what is human and electric power, and in comparison to other e-bikes I've ridden, that's true. Sure, the Mahle ebikemotion 250-watt motor is to thank for that, but the way this drivetrain doesn't overpower the rider and doesn't take away from the actual cycling experience is something to be appreciated.

Exploring more about this electric system and what it has to offer, one of the power points is that it comes with a peak range of 80 kilometers (50 miles) and can boast an extra 60 kilometers (37 miles) with a range extender mounted in place of a classic water bottle. Then there is the 40 Nm (29.5 ft-lb) of torque that is indispensable in a city setting, even one as hilly as the area I live in. In a hill test revealed in the video below, I maintained a constant speed in Boost mode without ever having to raise my Gluteus Maximus off the saddle. Sure, I was a tad winded at the top, but that's what a bike is supposed to feel like.

Another feature that needs some attention is the Gates Carbon CDX drivetrain. Not only is this bugger silent and smooth, but no matter how hard you try, it looks like it'll never skip a beat. I think your best chance is to snap it before it loses grip on the sprocket. A feature I couldn't test was its range, reported to be around 30,000 kilometers (around 19,000 miles). Nonetheless, two weeks was more than enough to tell me all I needed to know about why Urwahn chose this manufacturer to complete the sleek feel and capability of the Platzhirsch.

Part of this bike's appeal is also evident in the level of minimalism and integration that can clearly see. Since it's a city-destined e-bike, Urwahn chose to use LightSKIN handlebars and seat posts with integrated LED lighting. I kind of felt sorry for oncoming pedestrian traffic because this headlight looks like it can even blind bats. With fenders and the ability to add cargo racks, the Platzhirsch is complete. Did I mention that all the components add up to just 14 kilograms (30.9 pounds)? Yeah, it's light enough to carry up and down stairs with nothing more than just one hand.

The bottom line is this, as my first ride of day one closed to an end, I didn't want to get off this bike. Oh, and if you feel that it may have just been the magic of the first few moments, or infatuation as it's called, it wasn't. This effect was one that I encountered after every ride, some ending with the Platzhirsch in my kitchen, shielded from rain and dust, and with me sitting on a chair just staring at it, rehydrating and catching my breath.

Finally, I received an e-mail that it was time to turn this sucker in; I didn't want to. Nonetheless, I can say that I look forward to owning my very own Urwahn Platzhirsch in the future, or any other bike from this crew's lineup, for that matter, and I'm not the kind to dish out near $5,000 on anything. 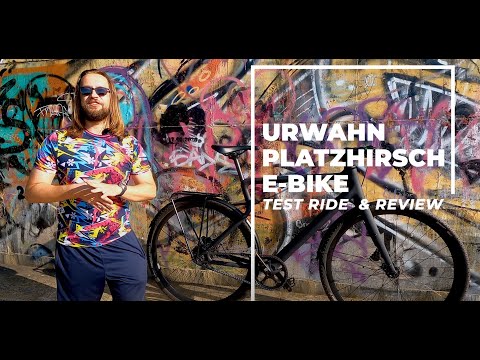