2 Will Furious 8 Be Handled by the Franchise’s Initial Director, Rob Cohen?

Paul Walker is a name we have been hearing quite often in the last two years or so, but as opposed to other famous people who unexpectedly pass away, at least he has left behind a powerful legacy. It’s about caring for others, trying to help those in need and really make this world a better place.
10 photos

As you probably heard by now, one of the things Fast and Furious fans do quite often is turning their own rides into replicas of the ones that starred in the films. The 1997 Mitsubishi Eclipse in question, however, is not just a way petrolhead showed his love for the car chasing franchise. No, this guy is actually the owner of a car shop and customized this old breed with a precise purpose.

“This car was made to be every bit of awesome. The car is in excellent mechanical shape. Runs like a dream, indeed an excellent model. This car is sold as-is. Keep in mind it's a 20yr old vehicle, however, it has been maintained beautifully, and the restore was just done recently,” details the current owner, who recently put the vehicle on eBay.

Sure, the original customized sportscar did not play a prominent role in the first installment of the Fast and Furious franchise, but that doesn’t mean it wasn’t one of the vehicles Brian O’Connor drove. Paul Walker’s character used the Eclipse in preparation for his first street race.

If we our memory still works in the right way, during the race the vehicle’s intake manifold began to overheat from an overcompensation of Nitrous oxide used in the car. Brian ignored the warnings it may damage the car, and continued to use the NOS until it starts falling apart. He beats Edwin but loses control, and Dominic wins the race.

Sure, this is just a scene in a movie, but for millions of fans out there it remains one of the greatest ones in the franchise. As a matter of fact, the seller of this replica is counting on that to sell the car, as the more money he gets on top of what he spent for tuning it, the more will go towards Paul Walker’s Foundation. 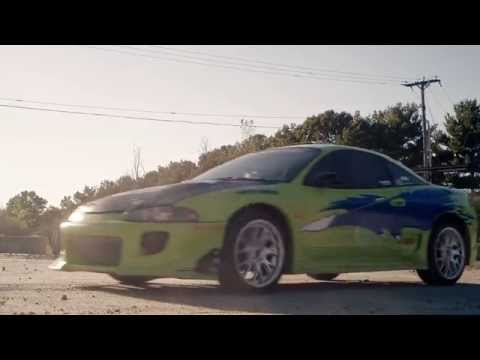