5 Mod-1 Spearfish Torpedo on Its Way to Underwater Supremacy, Doesn’t Hold Back
Car video reviews:
Up Next

The British Royal Air Force’s stunning submarine-hunter got to show what’s it’s capable of, for the first time, during a recent test where it dropped a recoverable exercise torpedo, simulating the final phase in a lethal attack against an enemy submarine.
7 photos

Poseidon P-8A is RAF’s multi-role maritime patrol aircraft that’s ready for a wide range of operation, from surveillance tasks and search-and-rescue missions, to tracking and hunting down the most dangerous enemy submarines. With its radars for high-resolution mapping, acoustic sensor system and an advanced weapon system, it fully deserves to be known as a submarine hunter.

RAF and the Royal Navy announced that Poseidon conducted a successful training flight over the Moray Firth, while dropping the Mark 54 Lightweight Torpedo, in a simulated attack. Normally, this would have been a Sting Ray, the UK military’s standard lightweight torpedo.

For the exercise, the Mk 54 did not get to blast its lethal power all the way. A version with no propulsion and no warhead, equipped with a drogue parachute, represented the Recovering Exercise Torpedo. The launch marked the first successful test of its primary weapon system, for the Poseidon.

The aircraft that conducted the exercise was one of the five currently in service with RAF, operated by the 120 Squadron, based at RAF Lossiemouth. A total of nine P-8A aircraft were ordered, with the other four expected to arrive by the end of this year, completing the submarine-hunter fleet.

According to the Royal Navy, the Poseidon fleet represents “one layer of the defensive ring” centered around anti-submarine warfare, next to Merlin Mk2 helicopters, Type 23 submarine-hunting frigates, plus A and T-boat hunter-killers. 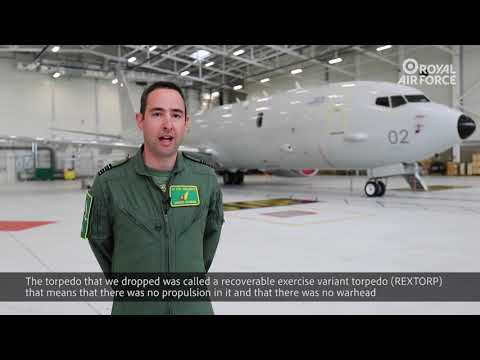