McLaren has a whole bunch of brand new machines to cater to its fanbase, and all of them are dream rides. However, none can match the hype of the iconic F1, a truly jaw-dropping, neck-snapping supercar with a central driving position and no safety systems.
10 photos

Made in the 1990s, the F1 used to be the world’s fastest production car, reaching a little over 240 mph (386 kph) and beating a modified Jaguar XJ220. Only 106 of them saw the light of day, including this grey example that attended the 2021 Concorso d’Eleganza Villa d’Este.

Breathing the same air as some of the hottest old timers on the planet, as well as some modern ones, and a very special Lamborghini Countach that is neither old nor new, this F1 was filmed up close, being maneuvered into a relatively tight space.

Needless to say that it captured everyone’s attention, as bystanders had their cameras ready to immortalize it. And that’s exactly what they did throughout the driving and standing still part. But it was a smoky powerslide that put a huge smile on their faces, proving once more that it is an absolute dreamy analog supercar, with a naturally aspirated 6.1-liter V12 making 618 hp, directed to the rear wheels through a six-speed manual transmission.

Now, unless you’ve been living under a rock, you know that the F1 commands tens of millions of dollars. In fact, the most expensive road-going unit changed hands for a whopping $20,465,000 earlier this year. That one has a Creighton Brown exterior on top of the tan and dark brown leather interior, and only 242 miles (390 km) on the clock. It left the factory floor back in 1995, and to this day, it retains the original Goodyear rubber. Accompanying it were the TAG Heuer watch, tool chest, titanium tool kit, custom luggage set, owner’s manual, and a few other bits and bobs. 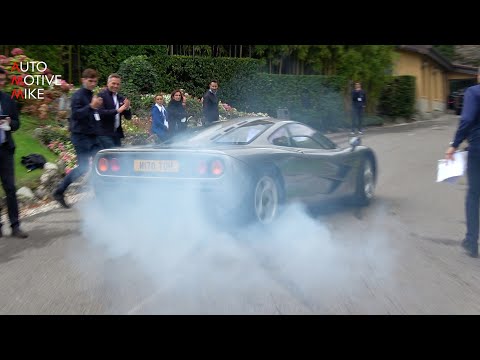