Porsche Curates 911 Art Car Based on a 964 Model, This Is Its Story

Art cars are a trend that does not have a specific starting point, but a few manufacturers have embraced them and celebrated their existence. BMW is known to have gotten several artists involved in art cars decades ago, and then used those vehicles in competition. Porsche is no stranger to the trend, either, and this is the latest one in the past six decades.
9 photos

In the case of Porsche, the trend is believed to have been started by Janis Joplin, the famous singer who departed from this world at age of 27, back in 1970. Just two years prior to that moment, she had acquired a 1964 Porsche 356 SC, which was painted Dolphin Grey, and commissioned one of her roadies to portray "The History of the Universe."

While it was no small task for $500 in 1968, Dave Richards completed the work, and the vehicle became synonymous with its owner. Many years later, the same 356 was restored and then auctioned off for $1.8 million at a public auction. At the time, Joplin's 356 was the most expensive model of this kind to have gone under the hammer, but it did have an incredible story behind it. Not only was it owned by Janis Joplin and turned into an art car at her request, but it was also stolen, recovered, repaired, and restored decades later.

Last year, German artist Hanna Schönwald made an art car out of a Porsche 911 of the 964 generation, which was generously loaned by a client back in January 2021. The video about it did not get too much traction, despite the fact that it was a Porsche art car that was essentially curated by the manufacturer. To get this project going, Hanna quit her full-time job as a utility vehicle designer after she completed her thesis in industrial design.

Thankfully, the German manufacturer took the time to translate the video and voice-over it in English, and now we can all understand what it was all about, not just those of us who can understand a thing or two in Goethe's language. Documenting the process took more time than expected, so the project was unveiled to the public at the end of last year, and now it gets to be seen by an even broader audience.

Hanna Schönwald (that translates to beautiful forest if you split the surname into two words, btw), also sells art curated by Porsche on her website, so go check that out if you want to get something made by her. Until you do listen to her story, you should know that she is an industrial designer living in Hamburg, and she graduated from the Pforzheim University of Design in 2020.

On top of being an industrial designer and an artist, Hanna is also an illustrator, and you will understand immediately why that is relevant after you see her work on the 964 Porsche 911.

Her career started with an internship in an automotive repair shop, and her first classic car was a Mercedes-Benz W123. From 2018 to 2019, Hanna got an internship at Porsche AG in Weissach and then moved on to EvoBus (Daimler subsidiary), where she stayed to get her bachelor's thesis. 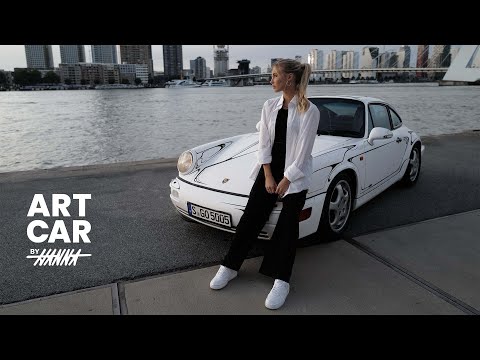