The 1989 Porsche Carrera 2 was the first 911 to offer a sequential automatic transmission and power steering. But these were not the only two key-factors that made the car great.

After the introduction of the new generation, the 911 brought '90s features for a car designed in the past. The Tiptronic (automatic with manual override) transmission was a new system on the market and the Americans loved it.

From the outside, the Carrera 2 was a 911. The hood lower than the front fenders, the curved, but almost vertical, windshield made a clear distinction between the front and the greenhouse. The sloped-back roof was ended over the engine lid, where a speed-activated spoiler was automatically deployed at highway speeds.

Inside, the owners of the previous generation noticed more similarities with the old generation. The main differences are for the safety systems. The 964 was fitted as standard with dual airbags, for the driver and front passenger. In the back, there were two small (very small) seats. The five dials for the instrument cluster featured a black background.

For the engine, Porsche offered the flat-six, unit. It offered 260 hp and it was fitted with the latest development systems that mare possible such a high specific output for that era. It was mated either to a 5-speed manual, or a 4-speed automatic with manual override to change gears named Tiptronic. The new suspension moved from torsion bars to struts, which improved the car's handling. 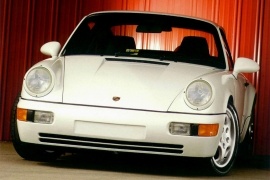